While I was searching for a new on-budget laptop to buy, especially after my Lenovo Thinkpad x260 almost died, I did a lot of research specifically about what CPU & GPU vendors to choose, mainly because I use Linux only and I was worried about some rumors of compatibility and other issues.

At the end I chose AMD, and I bought a laptop powered by AMD. My experience with it on Linux has been wonderful so far. This is my story, and why I think that you should go with AMD for your next PC too.

One of the biggest security stories of the last year, as well as this year, was the discovery of the Spectre and Meltdown vulnerabilities, which were followed by a huge series of other side-channel vulnerabilities. A quick research showed me that most of those vulnerabilities affected Intel CPUs, and few of them affected AMD’s products. You can check the number of discovered security vulnerabilities in 2018-2019 for both Intel and AMD, and notice the huge difference in numbers between the two (While I acknowledge that a lot of Intel’s issues were software, the number of hardware-only vulnerabilities remains bigger, also notice that most of AMD’s page is saying that those issues do not affect their products, such as Fallout, RIDL, ZombieLoad, Spolier, TLPBleed and others, they only affect Intel).

What was more concerning and enraging for me while I was following the news at that time, was the lack of responsiveness from Intel’s side. It took them a long time to release their patches, and even when they did, according to Linus Torvalds, they were “utter garbage”. I have no idea how the security team at Intel could’ve cared less for such serious issues and problems.

The other issue was that a lot of those vulnerabilities remain unfixed, because they are in the design of the CPUs their selves. They can only be fully-fixed by buying the most recent CPUs, which wasn’t even an option for me (Remember that I was searching for an on-budget laptop).

The other aspect of the previous security issues was performance. A huge number of benchmarks reported that after applying the new Intel’s microcode, along with other kernel-side fixes, Intel’s CPUs performance went down by 10-30%. This didn’t happen just on one CPU family, but almost on all of them. After a while, it became quite clear that Intel had cut some sharp edges in order to compete with other vendors and market its products as the best performance-oriented ones.

This issue was one of the main reasons why I chose AMD; Their fixes affected performance so little compared to Intel’s CPUs, and those vulnerabilities continued to come. So it was a safe move to choose AMD for this.

Some other benchmarks done by Phoronix just few minutes ago demonstrate this even more.

For Dota 2 for example, on Linux, I was able to run it on high settings with 50-60 fps, and this was without installing not even a single extra software or driver from AMD’s or Dell’s websites. But on Windows 10, and even after I updated everything and installed the latest drivers, I managed to get only 30 FPS using the exact same settings. I noticed the same thing for CS:GO and many other games. Another benchmark by Phoronix for other graphics cards and CPUs is also reporting that AMD on Linux is actually better than AMD on Windows.

As a general knowledge to report here, AMD drivers for Linux are open source, and integrated in the Linux kernel as well as installed by default on the majority of Linux distributions like Ubuntu (Search for xserver-xorg-video-amdgpu package).

That’s not the case for a graphics card vendor like Nvidia. Nvidia drivers are very well known in the Linux community to have a lot of troubles in running and working, especially if it’s a Nvidia Optimus laptop. The open source Nvidia driver, Nouveau, is way much slower than the closed-source one.

This was one of the reasons why I wanted the graphics card also to come from AMD, not just the CPU. And indeed, as I can see myself, they work wonderfully out-of-the-box with no extra steps from me, and even give a better performance than on Windows. 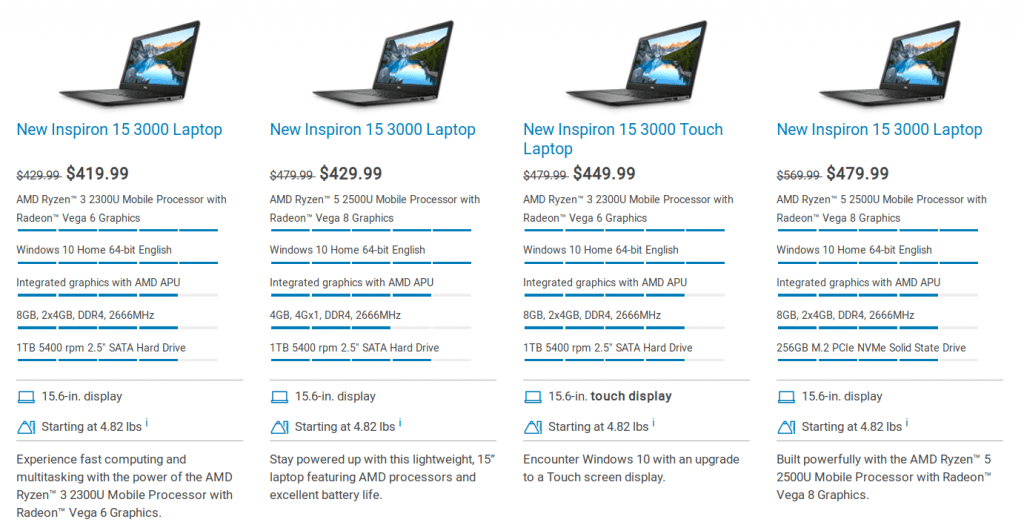 The laptop I bought for all those cool things was for just $500.

There were so many other laptops that are powered by Intel’s 7th and 8th generation i5 and i7 CPUs, along with an integrated Intel HD 520 or 620 graphics cards or even some strong ones from Nvidia, but the price tag became at least $100-200 more expensive. Something which I didn’t personally want to pay especially that most benchmarks demonstrated that there’s no huge difference between the two in terms of performance, and more importantly, for my workflow, I really didn’t need that tiny extra performance.

However, for you, and if you are looking for something more than just-a-suitable-laptop like me, then you’ll be delighted to know that the new AMD processors do beat Intel’s processors in the 3Ps: Performance, Power and Price.

One other aspect which I would like to highlight here was how horrible PC vendors builds were for AMD; You may find a laptop powered by an AMD CPU with a dedicated graphics card, good RAM, nice screen, but it only comes with a mechanical hard disk which runs on 5400 RPM (No SSD), and I was really shocked for how little the options were available for AMD-powered laptops. And I was wondering why there were thousands of laptops from Intel for various prices, but only too few from AMD.

Quite fair-ly competition from Intel, I guess.

While the official tools by AMD do not support Linux, there are many 3rd-party tweaking tools for AMD’s CPUs and GPUs on Linux.

Right now, I am using a tool called “Ryzen Controller“, which is a frontend for RyzenAdj. This tool allows you to control STAPM limits, PPT limits, temperature limits, VRAM and transmission frequencies limits. There are some experimental options for adjusting the GFX and SOC clock speeds too:

I am also using a GNOME Shell extension called “cpufreq” that allows me to play with the options of my Ryzen 5 CPU. You can for example modify the CPU clock, along with the number of working cores, CPU governer, load/unload presets beside many other options: 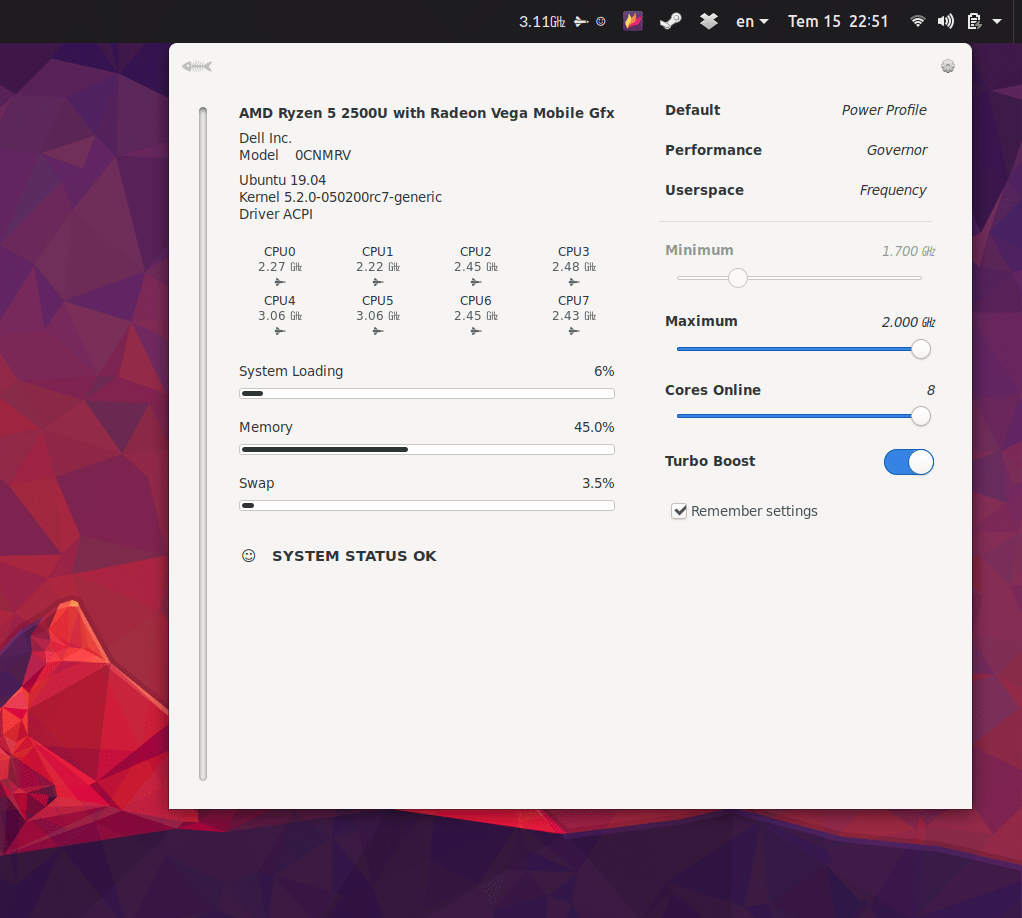 I also happened to stumble upon “uProf“, which is an official AMD tool to monitor the performance of its CPUs and GPUs. This tool, unlike the official software settings application, works on Linux and FreeBSD too. So you can use it to monitor the internals of your computer.

If you are going to buy a new computer, whether it was a desktop or laptop, then I strongly encourage you to make it fully AMD-powered. There are so many options to choose for both the CPUs and GPUs for extremely affordable prices comparing to that of Intel’s or Nvidia’s. More importantly, you’ll get a computer with higher performance, better security and more Linux-friendly for sometimes half the prices from other companies.

I would like to hear about your experiences with both hardware families, and what do you think about the discussion in general in the comments below. I am also ready for any questions.