While the operating system itself is beautiful, it lacks some efficiency for new users, many software should be installed after the OS installation, minor bugs exist in some programs and the number of default installed apps is small comparing to the size of the ISO image, also some parts in the UI needs adjusting like in the AppCenter and Files.

elementaryOS is an Ubuntu-based distribution that focuses on desktop beauty and ease of use, it’s a well known distribution if you are interested in beautiful interfaces on the Linux desktop, it offers its own interface called “Pantheon”.

Yesterday, the elementaryOS project has released version 0.4 of its Linux distribution under the codename “Loki”, the new version came with a lot of updates and new software, some of them include:

You can go ahead and download the new release from the main page for the project, just enter any number (or 0) in the price box in order to able to download the ISO file, no need to pay (but recommended).

So we have downloaded the new distribution in order to test it and give you a general idea about it, we tested it on a Lenovo G50-80 laptop with 8GB of RAM and Intel(R) Core(TM) i5-5200U CPU @ 2.20GHz processor, this was the start:

From the first look, the OS seems clean and organized, the interface is one of the most beautiful interfaces on the Linux desktop, the developers for sure made a huge effort on developing such user interfaces.

The application menu is faster now with a better search box and display options:

As we said, the default web browser now is Epiphany; it’s actually the default browser in GNOME environment and uses the WebKit engine, it’s not that much actually but still better than Midori:

I don’t know if anyone would like this app? Personally the first thing I’ll do is removing it and installing Firefox or Chromium, they offer much better interfaces beside tons of plugins, while in Epiphany, there are no plugins to use and the interface is sort of “plastic”, you feel like it’s just a page-displaying interface with some buttons at top and nothing else. Same thing applied to Midori.

When you open the “Mail” application, a simple window will appear asking you to enter your data:

After it, the app will start displaying your emails, it integrates also with the system accounts which allows you to receive email notifications on your system, very effective:

The new message dialog is simple and clean:

There’s also a calendar app for elementary OS that allows you to schedule things to whatever time you want:

And the default “Music” app which allows you to play music, you can import files from wherever you want too:

For sure, there’s a Videos application as well, I tested it with an .mp4 file and worked instantly, no extra codecs needed:

The text editor is called “Scratch”:

Here’s the “Photos” app, it monitors your whole home folder for pictures:

This is the system settings window, it looks “good” for a control center, it is completely written by the elementary team:

From the “Applications” settings, you can choose the default applications on your system, you can also create / remove startup applications from there:

From the desktop tab, you can choose the wallpaper, one of the good thing about elementaryOS is that they ship nice, beautiful wallpapers by default to choose from, unlike some other people who have been using an almost auto-generated wallpaper for the last couple of years, I bet you know whom I am talking about:

Some settings exist also for the dock:

You can also configure hot corners, what type of actions you want to happen when you touch the edge by your mouse:

The keyboard settings are very easy to modify, from the same window, a better story than GNOME:

This is what you need in the battery settings:

The network settings are well organized, you can reach any setting you want about networks from that window, you can also establish VPN or hotspots connections if you want:

This is the “about” window for elementary OS 0.4, there’s a small button here to “Restore Default Settings”, if you messed with some system or interface settings and would like to go back to the default ones, just click this button:

However not everything is good about this center, when I clicked on the “Language Settings”, it automatically changed the control center’s language into Bulgarian language, I don’t know why (I guess because Bulgarian is placed at the first language option, so some bug is setting to it automatically when you open that dialog): 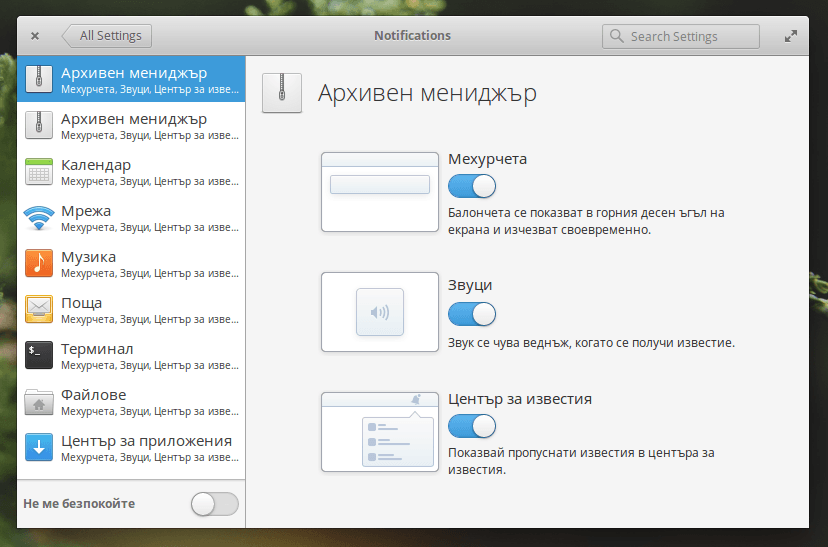 Also, I had a crash when I opened the sharing settings, the system settings program crashed with no displayed error message. I guess elementary OS team should focus a bit on fixing such bugs and problems beside those UI/UX improvements.

There’s a new application which is the “AppCenter”, it’s a software center that allows you to install, update or remove software:

In the live session, you won’t see any available apps to install in the software center, just the installed ones:

But it’s working good after installation, you will see all the available programs to install:

This is the details page for Steam, I think they need to improve the floating bar size a bit beside other things for displaying the package description and the image:

However the update page is good, you can update whatever program you want – or the whole system – from there:

It’s also worth to mention that the distribution is almost empty; No many default applications are already installed, for example even LibreOffice isn’t installed so you can’t manage your documents or open them, you almost only have the elementary OS applications, Files, Photos, Videos.. But nothing else, and this is not a very good deal comparing it to a size of 1.4GB for the ISO file. You will need to do a lot of downloading after you install the system on your hard drive.

This is the “Files” application, you can run it from the terminal by pantheon-files, it’s clean and nice:

Some binary files don’t run, for example I tried to run a game called “DDNet” which offers 64-bit binaries for Linux, but it didn’t run, the Files application just asks me for how I want to open that file (which program to use to open the binary file), this didn’t happen with me on any other Linux distribution.

This is the terminal window, it’s simple and nice:

There’s a “Multi-tasking” button on the dock that allows you to manage your windows like this, similar to GNOME Shell:

One of the funny things that after I’ve finished this review, I needed to compress the image files and upload them to Dropbox, I couldn’t do it! There’s no option to compress files in the context menu:

So I had to use the terminal and the tar command to do it. Update: This problem exist only in the live session, there’s an option to compress files after installation.

Also talking about the “Screenshot” tool, the developers say in the release announcement about it:

Current Window mode takes screenshots of apps with transparent backgrounds; this is great for developers or anyone who wants to show off an app window without grabbing their wallpaper or bits of other windows.

This is not good for web blogs at least, and you can’t disable it from the tool’s settings, so I used gnome-screenshot.

Also, in all elementary’s apps, the window buttons are placed on the left, this is not the default for LTR languages, it should be only for RTL language like Arabic and Hebrew by default:

Elementary is a beautiful distribution, I can’t deny that actually, but the system itself with its default software isn’t out-of-the-box usage ready, for example you need to install LibreOffice yourself, also some bugs and usability problems exist in the software (Like the files compression problem, you can’t compress files).

Elementary team actually pointed to a good point about developing desktop distributions, normal users like doctors, teachers, police staff, banking staff and others need beautiful easy-to-use interfaces, things like what elementary already provide, which is actually great, but system stability and efficiency is also very important to the end user, which has sort of lackness a bit in elementary.

The developers should focus on solving such bugs in both the system and the software before releasing it to the public, beside testing it for the needs of the daily average user, it’s not important to just to do UI/UX improvements and introduce a very tweaking-needed operating system at the end, or let the user search for essential software by himself.

Elementary introduces a great part of what Linux users really need and what may really take the desktop industry, however, they need to focus more on the system core instead of just the system look and feel.

While the operating system itself is beautiful, it lacks some efficiency for new users, many software should be installed after the OS installation, minor bugs exist in some programs and the number of default installed apps is small comparing to the size of the ISO image, also some parts in the UI needs adjusting like in the AppCenter and Files.