Open source software were always promisable. Thanks for the collaboration, opportunities and infrastructure that it provides to both end users and enterprises. Linux is an amazing example for a successful open source code which shapes future.

The 25-years-old operating system has grown so fast. Today, it is used almost everywhere. From web servers, android devices, supercomputers and to IoT devices. Linux became more than just an operating system to run some lab servers. And because of this, it created huge opportunities for enterprises to benefit from. This market allowed great tech companies to be established to fulfill its needs. Which gave us the 3 major[ref]Meaning that they use Linux and open source software as their main business.[/ref] Linux companies: Red Hat, SUSE and Canonical.

The business model for each of the major companies was similar; selling support services and subscriptions for their own open source and Linux-based products. It was the case for most business models in the open source world as well; profit from around the product, not the product itself.

In this report, we highlight the latest financial information about these companies, and what products and services they provided in order to reach this level.

Since its establishment in 1993, Red Hat grown so fast to become the biggest Linux and open source company and a key player in the open source world.

Red Hat offers a lot of solutions and services. Such as Red Hat Enterprise Linux, which is its own Linux distribution made for enterprises. And Red Hat OpenStack, which is a platform for deploying and scaling public and private clouds. And OpenShift, which is a platform-as-service (PaaS) solution to deploy web applications (written in Python, Node..) as a standalone contained platform. Red Hat also provides management solutions such as Red Hat Cloudforms and Anisble.

Red Hat provides a lot more products and technologies. Red Hat certifications are one of the most valuable certifications in the Linux market. If you are planning to get a career in this field, you definitely would go for RHCSA or RHCE. According to Red Hat[ref]Red Hat: https://www.redhat.com/en/about/trusted [/ref], more than 90% of the top 500 fortune global companies rely on them for their infrastructure. This ecosystem of technologies, certifications and services is the main investment for Red Hat.

A complete list of what Red Hat offers can be seen below: 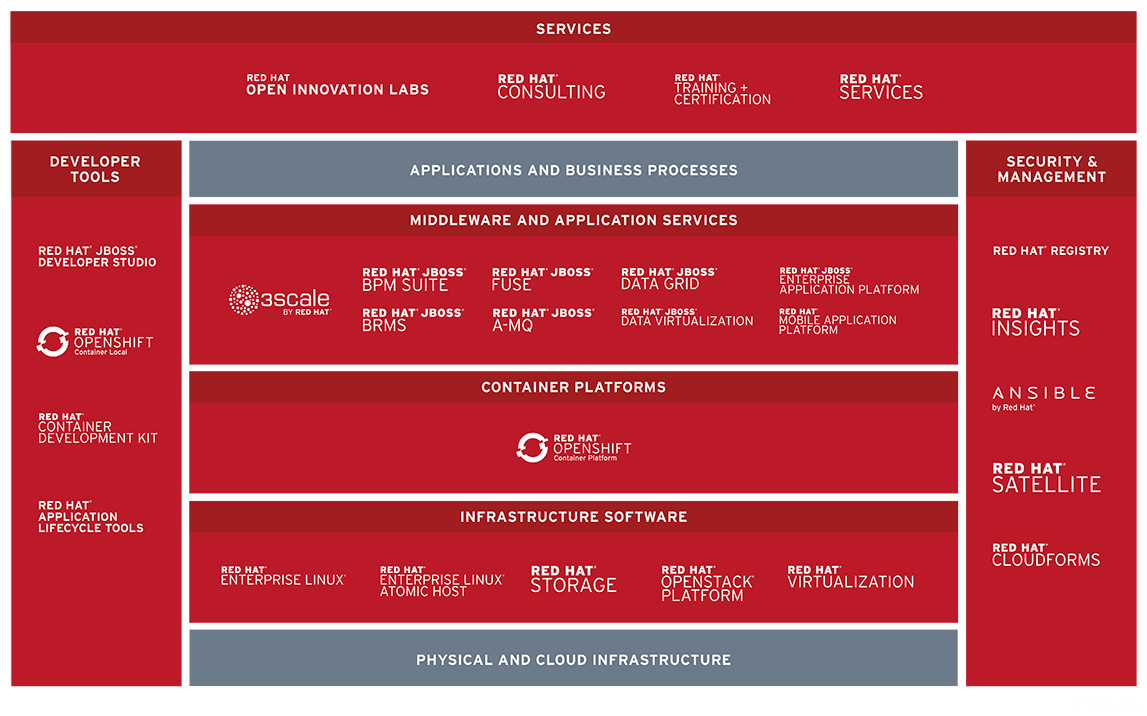 Red Hat also has a lot of contributions to a lot of other free and open source software. Even software which is not owned by it. A complete list can be retrieved from Red Hat’s website.

With a number of around 10000 employees around the world[ref]Red Hat Resources: https://investors.redhat.com/ir-resources/investor-faqs [/ref], Red Hat’s 2016 fiscal year (ended in February 29, 2016) showed[ref]Red Hat’s Financial Report: https://investors.redhat.com/~/media/Files/R/Red-Hat-IR/documents/annual-reports-and-proxy-statements/2016-annual-report.pdf [/ref] a revenue of $2.05 billion. A net profit of around $200 million and $716 million in operating cash, and total assets of $4.155 billion.

Respectively, Red Hat’s latest report about the third quarter results for fiscal year 2017 (ended December 21, 2016) showed[ref] Red Hat’s Financial Report: https://www.redhat.com/en/about/press-releases/red-hat-reports-third-quarter-results-fiscal-year-2017 [/ref] a revenue of $615 million for the quarter alone. The company is expecting a total revenue of around $2.4 billion for the fiscal year 2017 (which will end in February, 2017). Thus, making it – fairly – the largest open source company in the world.

SUSE: The Great Lizard of Linux 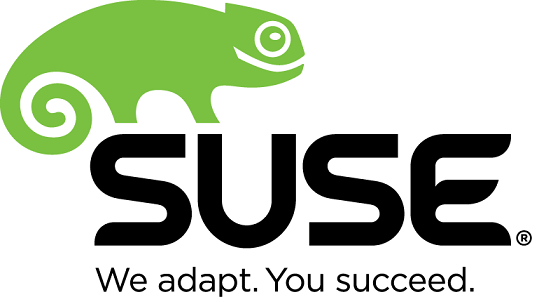 SUSE is also a very-well known company in the Linux world. When it was founded back in 1992, it was the first company to use Linux for targeting enterprises purposes. Back then, SUSE was a standalone company, but in 2003, it was acquired by Novel. Which was also acquired by Attachmate group in 2012. Finally, MicroFocus acquired Attachmate in 2014. Thus, SUSE became a subsidiary of the MicroFocus group.

SUSE provides services and products similar to Red Hat, keeping the enterprise in mind. Their main product is SUSE Enterprise Linux, which is their own Linux distribution ready for the enterprise. And SUSE OpenStack Cloud, SUSE’s own version of the OpenStack solution to deploy public and private clouds. And SUSE Manager, which is a solution for managing datacenters and multiple clouds (They even support Red Hat’s clouds). They provide a lot more products and technologies for the enterprise.

SUSE is growing rapidly, and is still providing a lot of enterprise solutions to the public since 1992. They also provide Linux certifications and training like SCA (SUSE Certified Administrator) and SCE (SUSE Certified Engineer).

Here’s a video about SUSE Enterprise Linux and its features:

With a small number of 750 employees around the world[ref]Michael Miller Q&A: SUSE and Attachmate Group: http://itic-corp.com/qa-interviews/michael-miller [/ref]. SUSE made $253.8 million in the fiscal year ended 30 April, 2016[ref] MicroFocus Presentation: http://investors.microfocus.com/~/media/Files/M/Micro-Focus/key-financial-data/results-presentations/presentation/preliminary-results-presentation-july-2017.pdf [/ref]. For the interim results which were shown in 31 October [ref]MicroFocus Interim Results: http://investors.microfocus.com/~/media/Files/M/Micro-Focus/key-financial-data/results-presentations/press-release/interim-results-2016.pdf [/ref], 2016 (duration of 6 months), SUSE made $147.4 million. An increase of 23.3% of the previous interim in 2015 for the same period which was $121.2 million.

These results place SUSE as the second player in the open source world after Red Hat. SUSE is also a key player in developing a lot of other free and open source software, which can bee seen from their website.

Canonical is the well-known company behind Ubuntu. The most famous Linux distribution on the desktop. They started developing Ubuntu in 2004. However, the company didn’t try to enter the enterprise market at that time. But it focused on the desktop only. Which made Ubuntu really popular at these years. But gradually, things changed.

Currently, Canonical is investing in a lot of different areas. From mobile phones to enterprise sector. The company offers Ubuntu Advantage, which is an all-in-one package that may fulfill lot of enterprises needs. It offers professional 24/7 support, livepatching service, LandScape management tool and a lot more. Canonical is also working on developing Ubuntu Touch, the Ubuntu system for smartphones and tablets. We have seen some contracts between Canonical and 3rd-party hardware vendors in order to ship Ubuntu pre-installed on some tablets like Bq M10.

For the enterprise, Ubuntu is providing an OpenStack solution for deploying cloud servers. Ubuntu acquires 55% of the number of deployed clouds using OpenStack alone according to OpenStack user survey in April 2016[ref]OpenStack User Survey: https://www.openstack.org/assets/survey/April-2016-User-Survey-Report.pdf [/ref] and according to Cloudmarket[ref]TheCloudMarket.com: http://thecloudmarket.com/stats [/ref]:

For the desktop, Canonical develops Unity interface which is the default interface for Ubuntu. They are also working on Mir; a fork of the Wayland display server which is planned to be an alternative for X, and ship with Unity 8. Canonical also released Snappy some time ago, which is a containers system for normal packages and applications. A lot of other services and products can be discovered from the Ubuntu official website.

Canonical is a privately-owned international company. Which means that they are not required to release any financial data about their profit unless the law of the country where the subsidiary is located requires. Canonical has 5 subsidiaries around the globe – beside its main headquarters in the UK – which are:

However, Canonical released their report for the fiscal year ended March 31, 2016[ref]Companies House: https://beta.companieshouse.gov.uk/company/06870835/filing-history/MzE2NjE2NTI3NWFkaXF6a2N4/document?format=pdf&download=0 [/ref]. With around 500 staff, Canonical made revenue of $103.3 million. But the operational costs were $106.6 million, which means that Canonical lost $3.33 million in that period and didn’t make any net profit. The report said that these accounts included all the other subsidiaries as well.

While Canonical controls a huge user base, whether it was on the desktop or on the cloud or even soon on smartphones, it fails to make profit out of this user base. The reasons remain unknown.

Linux and open source software are good places for investment if used properly. Usually, profit doesn’t come from selling the product itself, but from selling the support, addons and subscriptions relating to that product. Unlike closed-source applications, open source software focus on collaboration in order to make products better for everyone instead of holding it all by one vendor. Which makes these software develop rapidly and allows enterprises to benefit from.

The 3 major Linux companies, Red Hat, SUSE and Canonical all used a similar approach to earn profit from open source beside developing the community itself. However, the way and real practice of each one of them was different, which led into different results for each one of them.

Canonical is a cesspool. They actually do little development – they are simply repackaging opensource components. Issues are pushed to upstream owners .

While I cannot account for their development, I can say, after using Linux and a multitude of distributions over 20 some odd years, that Ubuntu is one of the most stable distributions if you want more modern applications. I have used and currently still usually have at least three distributions installed on any particular system I carry or own except for my one acting as server. Sorry, the best all around, driver installed system always seems to be Ubuntu with the exception of occasionally crashing installers. But hey – many I tried would crash on install. Besides, which company other… Read more »

“For the desktop, Canonical develops Unity interface which is the default interface for Ubuntu. They are also working on Mir; a fork of the Wayland display server which is planned to be an alternative for X, and ship with Unity 8.”

This will no longer be true. https://insights.ubuntu.com/2017/04/05/growing-ubuntu-for-cloud-and-iot-rather-than-phone-and-convergence/

Yep.. Unfortunately you are right. Probably we will never see it complete now.

long line linux, linux is freedom, open ocean, do what you want.