ERP is an abbreviation for “Enterprise resource planning”. ERP systems are used in small, medium and large businesses to do the work that the company needs from day to day. You can think of it as the software responsible for managing the companies activities.

How should you choose your ERP?

Almost all the solutions that we are going to see offer two versions: A managed SaaS (software as a service) service that you pay for each month according to the services and the number of users you have in your organization, or a self-hosted open source version that you can download for free with no support.

Apparently, the first step should be trying that ERP system that you like on your local machines, testing whether it’s sufficient for your tasks and employees, and if so, you could either purchase it as a SaaS, or request professional support when needed with the open source, free version.

But why would you choose one software over the other? The reasons are many: The offered functionality of that ERP system, the user interface design, the programming language of the system, is your IT department capable of modifying and developing that open source ERP system even further, localization, GDPR compatibility.. And many similar criteria.

Today, we would like to present 7 open source ERP systems that you can depend on. 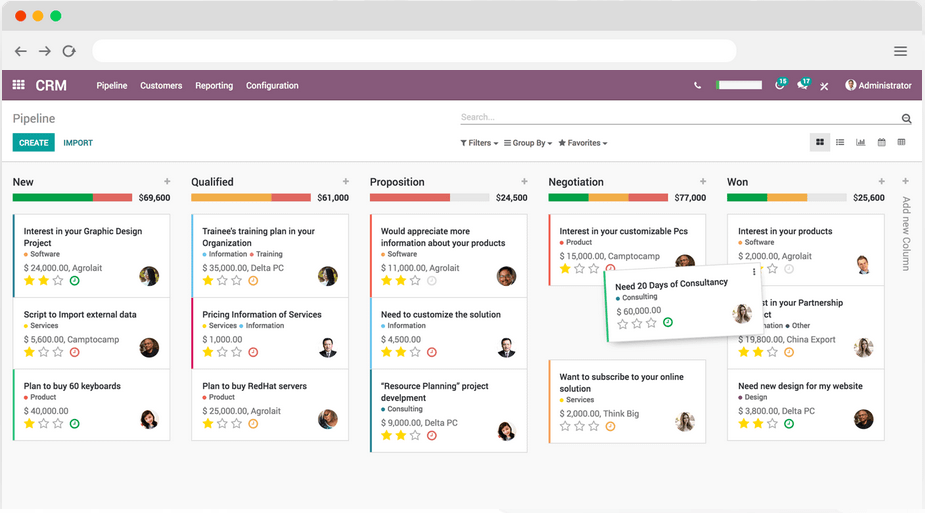 Odoo is one of the most famous ERP systems in the world. Its development started back in 2005, and its source code is written in Python. It’s licensed under the GPL 3 license while also offering a proprietary SaaS (software as a service) for those who want to directly pay for using the service with support and ease.

Odoo offers tons of apps; CRP, accounting, invoices, website builder, eCommerce, email marketing, project management, inventory and many more other apps. Such wide set of possible applications make is suitable for almost any type of business you may have. Additionally, the UI design of the system is very modern to today’s standards.

Odoo also supports 3rd-party apps, which are apps that are developed by the community for the Odoo system. Some of those modules are free and open source, while others are proprietary and cost a lot, but this gives you the ability to expand your system’s capabilities even further. Odoo Studio allows you to build your own Odoo app and distribute it, if you want.

If you are from EU, then you would be happy to know that Odoo is compatible with the new GDPR law.

ERPNext‘s development started in 2008, and then it went open source in 2010. The source code is written in Python and is released under the GPL 3 license. ERPNext depends on the MariaDB database system to store its data.

The company provides 30% discount on its plans for educational institutions who want to use their service. There are currently more than 3000 companies/organizations in the world that are using ERPNext, according to the official website. Its SaaS subscription plans are much cheaper and efficient comparing to Odoo. 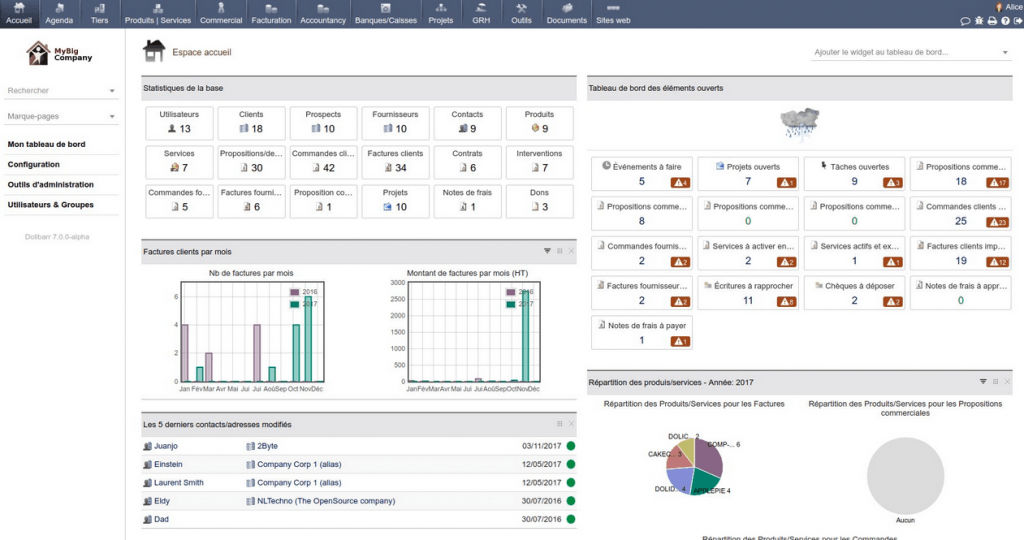 This ERP system is more classic. The UI isn’t really suitable enough for 2019, but still it provides many functionalities that you may find useful. Dolibarr is written in PHP and released under GPL 3. Its development started back in 2002.

Just like the others, Dolibarr provides modules to manage CRM, sales, finances, human resources, electronic documents, projects, calendars.. And many similar tasks. Thanks for it being working in PHP, setting Dolibarr is very easy with its preloaded auto installation, which supports MySQL, MariaDB and PostgreSQL. Dolibarr also provides binary packages for Windows, Ubuntu-based and Fedora-based Linux distributions.

This system enjoys very continuous development. The latest release (branch 9.0) was released just 2 weeks ago, so don’t think of it as some abandoned software or something. Dolibarr provides a free online demo where you can check how the internal system works, and see its possible features. You can access to it from this link.

To download the latest release, check the project’s page on SourceForge. 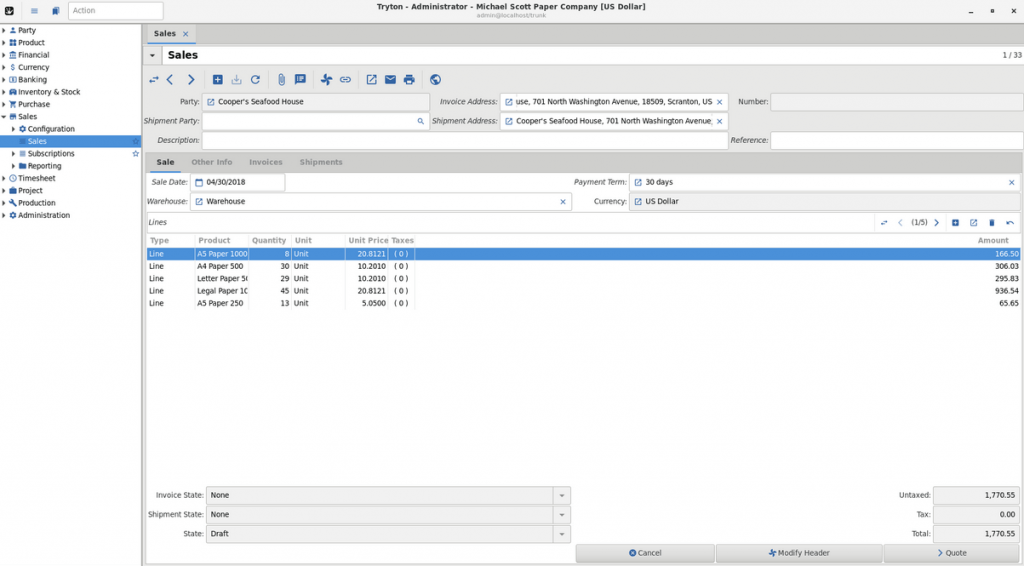 Using “modularity, scalability and security” as its slogan, Tryton is a very unique ERP system comparing to the other options. Its architecture uses a three-tier model to maximize the modularity of the software, making it closer to being a framework that can be developed later for any further requirements. Tryton system consists of 3 parts:

What’s unique is that Tryton is mainly using a desktop client for its operations, making it working natively on various Linux distributions (You can even find it in the official repositories). All the system is written using Python, and uses GTK library for its desktop client. There’s also a web client if you need.

Tryton also provides a free demo, docker images, prebuilt binaries for Windows, Linux and macOS. It is also available as a Python package to be installed using pip. Many 3rd-party modules can be installed for the system using pip as well.

You can browse the GPL 3-licensed source code from here. 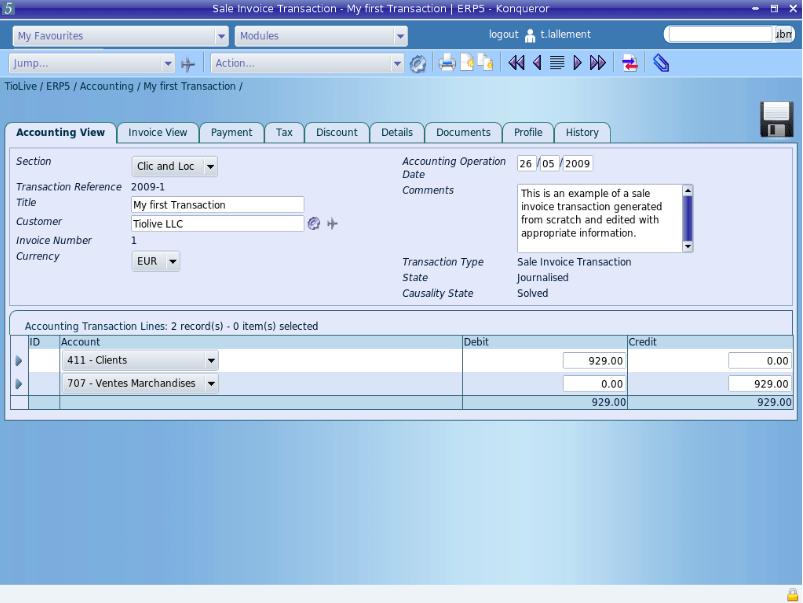 ERP5’s development started back in 2002, so it has been in the market for almost two decades. It’s written in Python and released under the GPL 3 license. ERP5 is indeed very popular in all parts of the world, you may find your ordinary retail shops or country’s official banks using ERP5 somewhere on their ecosystem.

One downside, however, is that the user interface of the system is very old and classic. It’s not modern like the other ERP solutions mentioned here.

Flectra is another ERP system that was released just few years ago. Flectra is actually fork of Odoo, however, Flectra was created for seemingly two main reasons: First, to allow a more open, collaborative development of the source code, and also offer much better pricing for the SaaS subscriptions provided by Odoo, and secondly to provide more features that are needed by the community.

Odoo initially didn’t like that move, as it saw Flectra as one of its possible competitors but using their own open source code, so they started a lawsuit. A lawsuit which would continue for almost a year before a jury in India announces that there are no copyright infringements in Flectra and that it’s OK to proceed working.

Thus, Flectra provides the same modules that Odoo provides, but with much better pricing and a noticeably newer user interface. There are also many new features that are supported by Flectra that are not supported by Odoo. 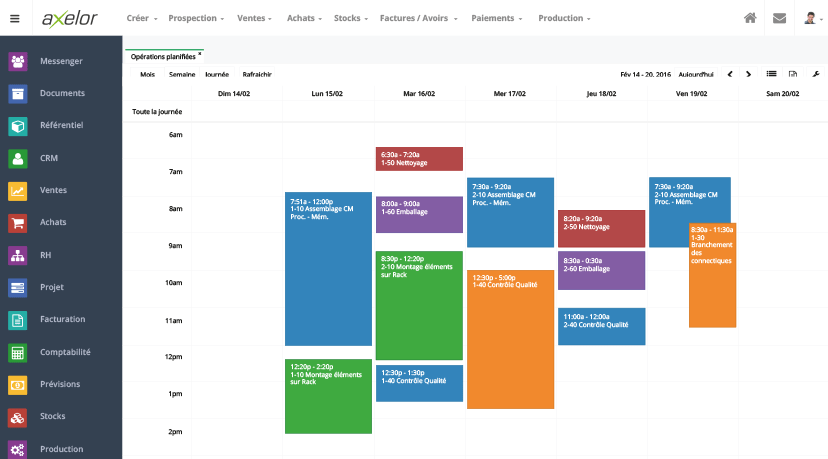 The final item on our list is Axelor. Its development started back in 2005, but went open source in 2012. The source code is written in Java and released under AGPL 3 license.

Just like any other ERP solution on our list, Axelor is capable of managing your CRM, marketing, sales, human resources, BPM, supply chain and all your finances. The system also supports some specific industries like retail shops, manufactoring, associations and public sector organizations.

Axelor offers a very modern user interface, and also provides binaries for Windows and Linux distributions, as well as a Docker image. A huge documentation base is available for free on their official website, making it one of the best open source ERP systems out there; Actual open source, not just in name.

Axelor is also compatible with the new GDPR regulations in the European Union.

We have seen in this list 7 good open source ERP systems that you may use in your organization. Which one of them to choose depends on what type of features or scenarios your business is going to need. It may also depend on the number of users you may have in your company, because a huge number may mean that you’ll be paying thousands for software subscriptions per year, or you may would like to set up your own instances of those open source ERP systems.

Do you have any other suggested systems to add to our list? We would love to hear about them in the comments below.

I would also recommend Idempiere ERP (www.idempiere.org). It’s a fork of Adempiere ERP (www.adempiere.net), but adds OSGI framework and thus the ability to create functional vertical plugins which are isolated from the core ERP.

Which software should I use instead of Tally ERP news!?

If your business is growing, surely tally will not be able to handle your business needs. This is a critical stage where you need a process to be in place and have a clear visibility of stock and inventory along a handy mobile app and with a technology which can help you for atleast next 2 decades. You should now go for ERP. As I feel naming something as ERP doesn’t actually means it’s an an ERP. Accounting software companies are playing with the users mind by using ERP with there product name. ERP comes with controls, process driven scenario… Read more »

And what about the IDempiere Business Suite? Odoo comes out of the box with very simple options. If you are coming from QuickBooks, and you need a simple ERP system help you manage your business, Odoo will look and feel comfortable.

But iDempiere comes out of the box with every feature installed and configured to run a $200M+ USD business. If your business is growing rapidly, and you are willing to invest the time to learn an enterprise accounting system, then iD/AD will give you confidence.

BlueSeer ERP should definitely be added to this list. It has a lot of traditional modules (MRP, EDI) that most ‘free’ ERPs pass over.

Tryton has also a web client which is equivalent to the desktop client.
You can try it on https://www.tryton.org/download#demo