Open source software can be useful for all types of tasks, even filling tax forms if you are a US resident.

Taxes in the United States are a little bit complicated compared to other countries, and there are federal taxes and state taxes, and one will need to fill many different forms – depending on their current financial status – and submit them routinely so that they don’t get accused with tax evasion or tax fraud.

Typically, people may hire some 3rd-party expert to help them in the process, or do it by their own. If they are doing it by their own, then they might depend on the help of typical proprietary tax software such TurboTax.

However, open source alternatives to TurboTax exist, and in today’s article we’ll be seeing two of them. 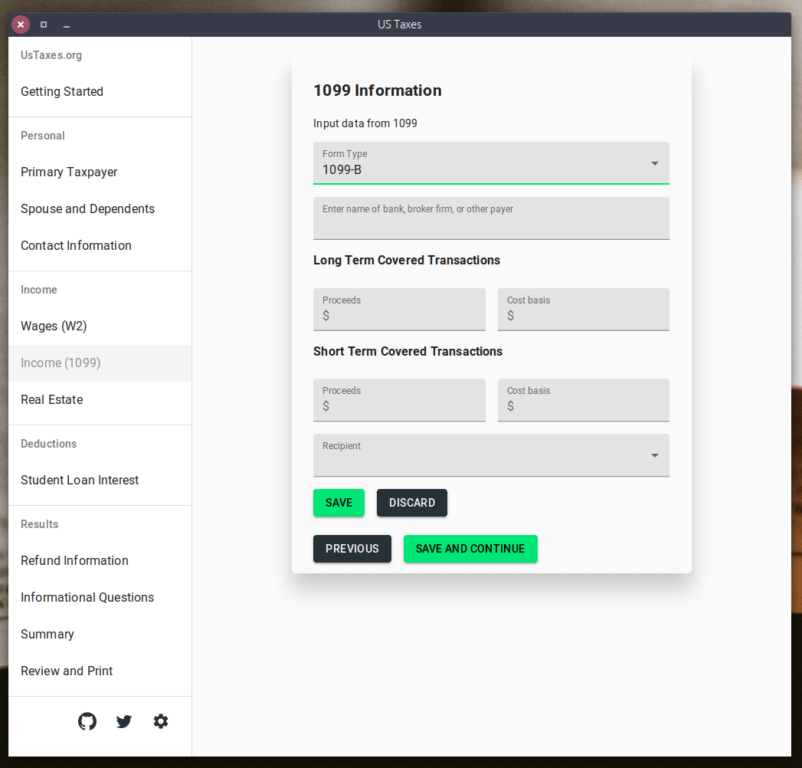 Relatively a very new open source application for filling US taxes forms, as its development started in 2021 only. UsTaxes provides a web and desktop interfaces for filling the following US tax forms:

Written in TypeScript, the software is available as an online website which you can access from UsTaxes.org if you want to fill your forms online. However, if you are concerned about your privacy or simply want to fill them offline, then you can use the desktop version of the software for Windows, macOS and Linux. Which ensures none of your data leaves your PC.

For Linux distributions, the software is available both in .deb and .rpm formats, as well as a portable .AppImage for running on other types of distributions.

The software is good and covers most of the needed forms for federal taxes. However, for state taxes, only 10 states are supported (Alaska, Tennessee, Wyoming, Florida, New Hampshire, South Dakota, Texas, Washington and Nevada), so you’ll need extra manual effort if you reside in different unsupported states.

The desktop version features a modern and neat user interface, ensuring that you can fill the forms in no time. Once done, you can export the forms you filled along your data in PDF format so that you can submit it to the IRS.

Check its source code on the UsTaxes GitHub page, or download it directly for your operating system. 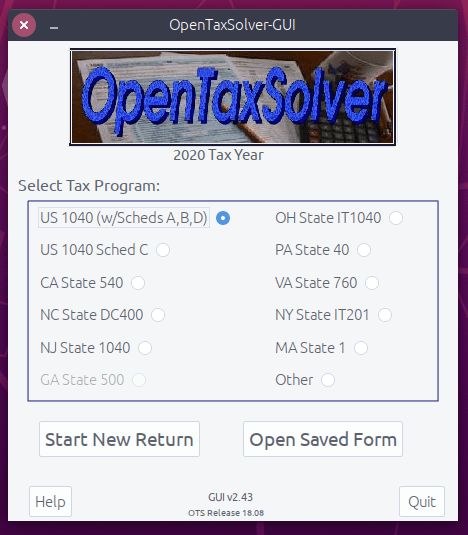 The very first open source tax filling application which comes to mind when thinking about an alternative to TurboTax by Intuit. OpenTaxSolver – or OTS – has been in the market for several years, and is continuously updated for each tax year in the US. The last update was for 2020 tax year.

The following forms and federal state taxes are supported:

The OTS package includes the most used forms released by the IRS and the several states, which are the Fed-1040, Schedules 1-3 along with Schedules A-D, and the states of VA, NC, OH, NJ, MA, PA, CA, and NY. As well as the Health Savings Account (HSA) Form 8889 and Form 8606 for Nondeductible IRAs, and Schedule-SE, which are accessed under the Other Forms bullet of the OTS GUI front screen.

OTS is programmed in C programming language, as can be seen from its source code. It is a desktop application that works on Windows, macOS and Linux distributions.

After installing and opening the software, you will be prompted to choose the tax forms you wish to fill. After it, you can fill your information in the available areas and then export a PDF containing it, so that you can submit it directly to the IRS: 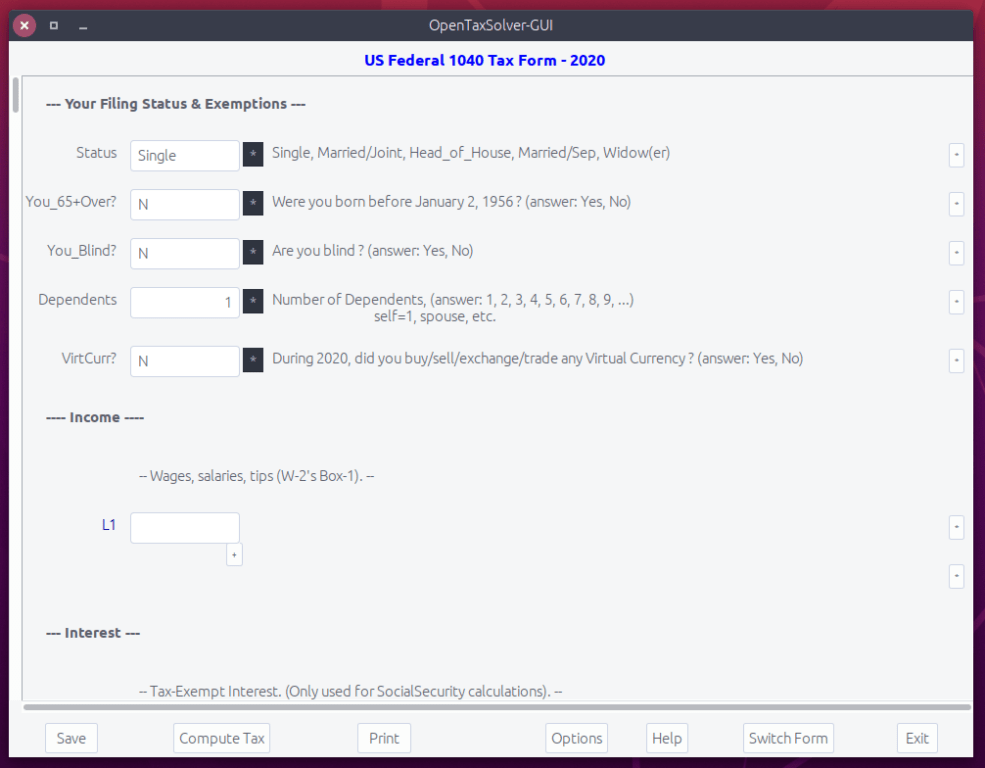 The user interface of the software is somehow classic, but still gets the job done nonetheless.

You can download OpenTaxSolver from its official page on SourceForge, or visit its website for more information about its development.

These two applications should get you going in filling your US tax forms. Both of them still do not support all forms and state taxes yet, but they will get there eventually.

There is nothing particularly hard about developing an open source tax software, but the issue is continuing to update the formulas for each state on yearly basis, as well as covering the “edge cases” which might not apply for the majority of users.

The mathematical formulas for US taxes are basic, but putting them in an application is the tricky part. Had the IRS published these formulas in a programmable format (like .YAML) on yearly basis by themselves, then software developers would have found it much easier to support all types of usage. Sadly, it is not the case.

Hence, it is very much suggested that you try contacting the developers of these software in case you are missing a support of something you need.

In any case, make sure you double-check the resulting documents before submitting them to the IRS, so that you make sure no mistakes or errors are there. Neither from you nor from the software.

What was possibly on your mind to make a happy face using the resemblance to Che Guevera, the mass murderer?