OpenOffice started as the open source version of “StarOffice” by Sun Microsystems in 1999. It continued to be a the mainstream Microsoft Office alternative through the 2000s and kept improving over time, until a community fork happened in 2011 after Oracle acquired Sun. The community feared that Oracle would shut down the project due to its past dark history against open source software and didn’t want to participate in a project under its control. Hence, LibreOffice was born in 2011 and most community members started working on LibreOffice instead of OpenOffice.

Oracle found itself in a tough spot since most of the community migrated to the new fork, and hence decided to contribute the ownership of OpenOffice in the same year to the Apache Foundation. The Apache Foundation from its side continued the development a little bit for a while (Until 2016-2017) but then, OpenOffice stopped reciving any major updates.

The latest available version of OpenOffice right now is 4.1.8, which was released this month, but is nothing more than a bug-fixing release with no new features. Versions 4.1.7 and 4.1.6 were released in 2019 and 2018 respectively, and they also contained nothing more than few fixes (5-10) for some bugs. OpenOffice didn’t receive any major update since 2014, so this should give you a picture on how slow and discontinued the development is on the project.

Although of all of that, the Apache Foundation is acting dead, as if nothing happened, and are bragging about their 300M downloads that they got since they received the ownership of the project in 2011. They also call people to volunteer to develop OpenOffice, as if the world didn’t change after 2011 at all.

Despite being an unmaintained software that didn’t get any similar quality features that its rival LibreOffice was receiving over the period of 10 years, OpenOffice is still being downloaded more than 1.5 million times per month, as shown on the project’s page on SourceForge. Which is mind-boggling.

Why would anyone download and use OpenOffice instead of LibreOffice? It just doesn’t make any sense at all and remains a mystery to be solved.

Exploring the download statistics deeper, OpenOffice received more than 20 million downloads this year so far, most of them were from the US and France. The download locations are fairly distributed around the world, so the situation isn’t that just a subgroup in one country is causing all the downloads: 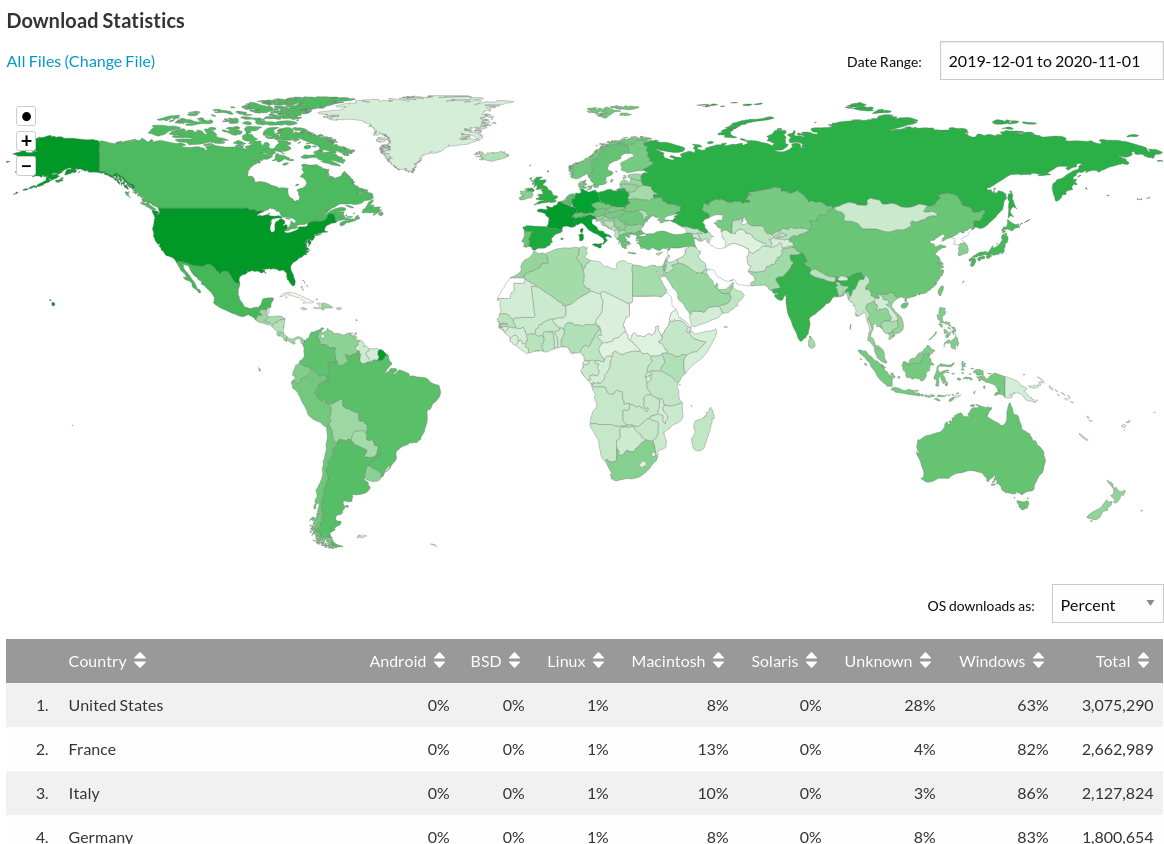 Additionally, most of these downloads were coming from machines using Microsoft Windows: 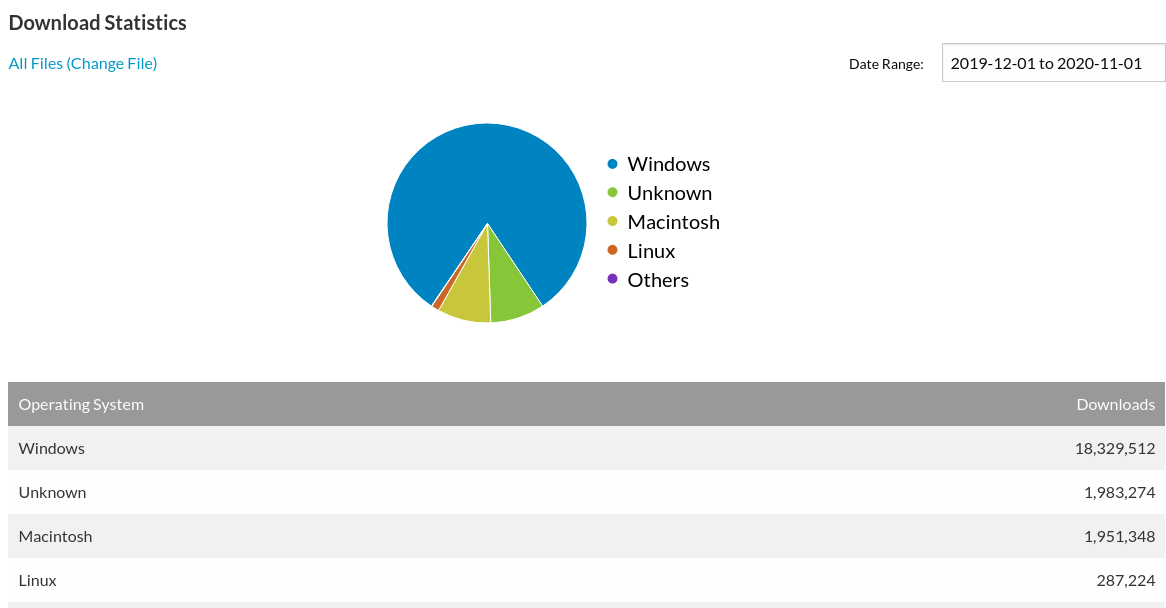 The only possible reason for this huge number of downloads is that people simply don’t know about LibreOffice; As suggested in The Document Foundation’s open letter to Apache Foundation regarding the development of OpenOffice, the OpenOffice brand is still so strong and common, to the level that IT mangers still don’t recognize any open source alternative for Microsoft Office other than OpenOffice.

It is a saddening issue, that millions of people around the world are downloading a discontinued software that wasn’t updated since 2014 and is missing tons of features, just because they think no one else exists.

It is also a more surprising fact that the Apache Foundation is still taking this stance and refusing to officially announce the end of the project after years of being undeveloped, rather than uniting the efforts with LibreOffice in order to boost the development of open source office suites facing Microsoft Office. It is a very irresponsible move of the Apache Foundation to continue acting dead and not hear to all these requests for official clarifications on why they don’t discontinue the project despite no updates or contributors arriving.

Perhaps more marketing for LibreOffice is needed to spread the word that OpenOffice is dead, and that its only real successor is LibreOffice. LibreOffice 7.0 was released few months ago with tons of improvements for reading and writing Microsoft Office formats, and is being heavily developed as of this very moment.

In your opinion what could be some possible reasons for this huge number of downloads other than what’s mentioned? And why do you think Apache Foundation is still refusing to announce the end of the project after all of these years? Would love to have a discussion in the comments section below.

You keep saying OpenOffice hasn’t been updated since 2014 but you clearly admit that it actually has received updates since then…. albeit nothing substantial. I think your assertion is the most likely unfortunately despite these IT folk being in a field that is constantly changing, they refuse to understand change and adapt. I myself am someone who much prefers LibreOffice from a product quality perspective as much as I do from a security perspective and agree that Apache seems to be holding onto the victories of past. I’m not too familiar with the organization of Apache and its projects but… Read more »

It would be nice to see a comparison of download numbers for OpenOffice vs. LibreOffice.

It would be irrelevant. Here\’s why: LO\’s download count is fueled exclusively from the LO website, unlike AOO which likely has a lower install count *from its own website*. AOO is pushed by Sourceforge as a featured program, and it appears from the way that AOO counts downloads that its almost entirely downloads from Sourceforge that have been generated from direct visits to SF\’s website and scripts like ninite. They even keep discussing sourceforge\’s download count scripts on the mailing lists as a promotional move. If Sourceforge mirrored LO\’s releases and temporarilly switched the office suite it features on its… Read more »

Open Office is actually still under active development. It releases a new version yearly (more or less). The latest one (4.1.8) has the timestamp of 5-11-2020. Check it there: https://sourceforge.net/projects/openofficeorg.mirror/files/ I have installed it, on a Debian oldstable based distro and I don’t have any major complaints from it. It actually needs lass memory from the respective Libre Office version (x64) and it still provides the “Quick Launch” tray application. On the other hand, at my Windoze installation, I have Libre Office installed, which still have the “Quick Launch”, (which is abandoned for Linux). Furthermore, Open Office, doesn’t provides an… Read more »

You clearly didn’t read the article which mentioned this exact thing. Giving a point release over the course of a complete year doesn’t mean it is under active development, especially when it contains nothing than 5 bug fixes where hundreds of other issues and bugs are accumulating over the years.

It may come as a surprise but some of us use “Old” software because it does what we need. I have been using OpenOffice since the beginning. Actually I used Neo Office for a while prior to OO. I don’t see a reason to change, specially since it does everything I want and the interface has been fine tuned over the years to my liking. So just because it is old, it doesn’t mean it should be thrown away. If in the future it does not meet my needs than I will consider switching, otherwise I am happy with what… Read more »

According to your reasoning, I suppose that you still use Windows 95, for example, don’t you?

Tricking windows users into downloading ancient, outdated and insecure binaries shouldnt be a project’s *only* source of misplaced pride…

The reason these downloads are even happening is because Sourceforge prominently displays AOO on its website. If LO also mirrored theirs there or even replaced AOO in the same placements, the numbers would surely reverse. SF can do a test switcheroo and realize for itself its needlessly propping up a dead horse.

As I recall the concern and cause of the fork for Libre Office was to avoid entanglement from Oracle. Since its been donated to Apache, I would figure that concern was less of an issue. So with that in mind, why are folks reluctant to participate in the Open Office branch now? I assume this is basically a case of “working on Libre” version so long and appreciate the community and don’t want to switch project or spend the time working one or more of similar product. I think PR is part of it. If communications are directed more towards… Read more »