Solus is an independent Linux distribution which targets desktop PC users. The project started in 2011 carrying the name “SolusOS” but later was changed to a plain “Solus”. What mainly makes Solus different is its desktop interface called “Budgie” beside a lot of other software like “eopkg” which is the distribution’s package manager.

Solus uses a rolling release model. Providing an updated ISO file of the distribution every few months containing the latest software and updates. This, however, doesn’t mean that the system is “unstable” like some other rolling Linux distributions.

There are a lot of exciting things when it comes to Solus. Its desktop interface “Budgie” is completely developed from scratch but is compatible with some GNOME technologies. It also has its own package manager called “eopkg” which uses .eopkg format for package files (it doesn’t depend on .deb or .rpm files nor can install them). “eopkg” was forked from Pardus Linux. But developers of Solus have plans to replace it with “sol“.

Solus also has its own software center. It allows you to search / install / update any package or program you want. It also provides a one-click-install option for some 3rd-party applications (Like Chrome, Flash, Skype..).

The latest snapshot is numbered by its release date, Solus 2017.01.01. We downloaded the new ISO and played with it for a while and this was our experience so far. TL;DR: It’s good and fast. Because of its own packaging system, you may have to wait for a while for some software to be in the repositories. But it provides most important packages and libraries to end users.

This version was released around 45 days ago. It’s considered to be the latest stable release. We chose to go with the Budgie desktop over MATE because it’s the “flagship” in Solus. This is the default desktop: 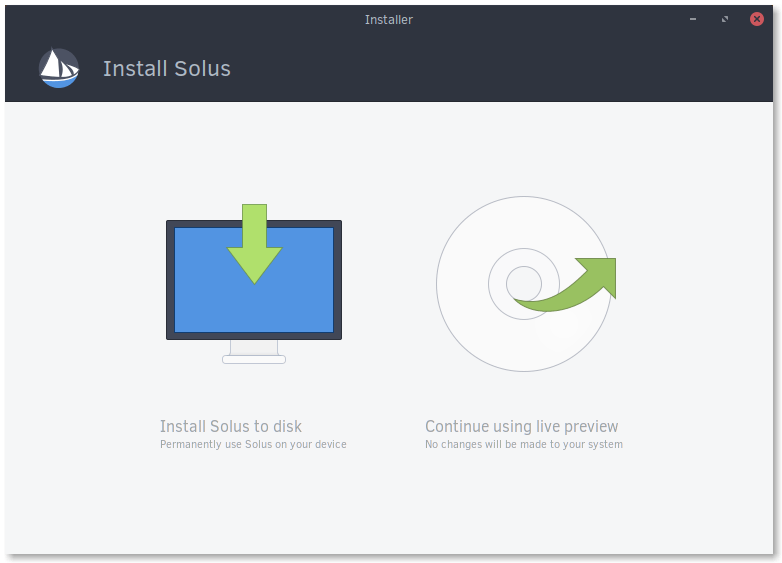 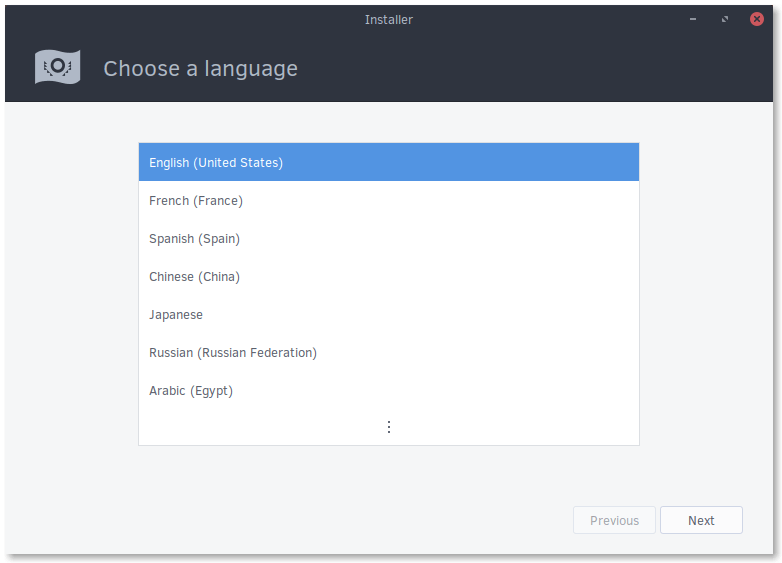 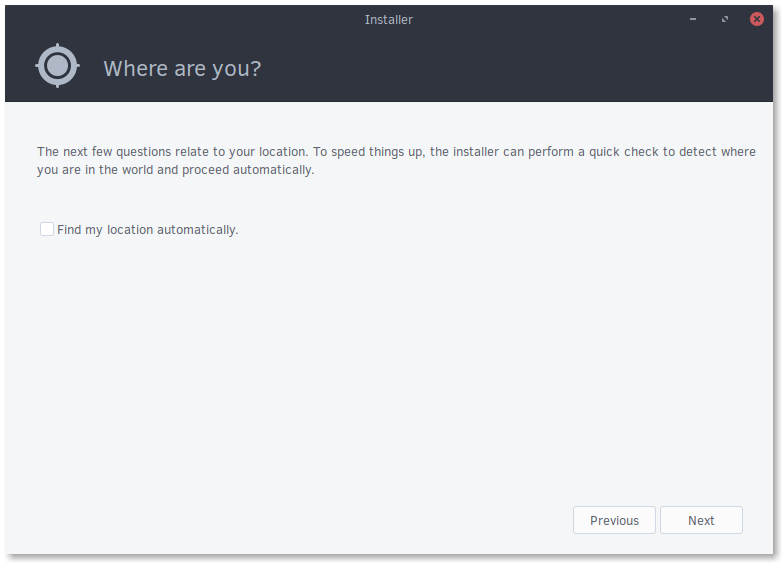 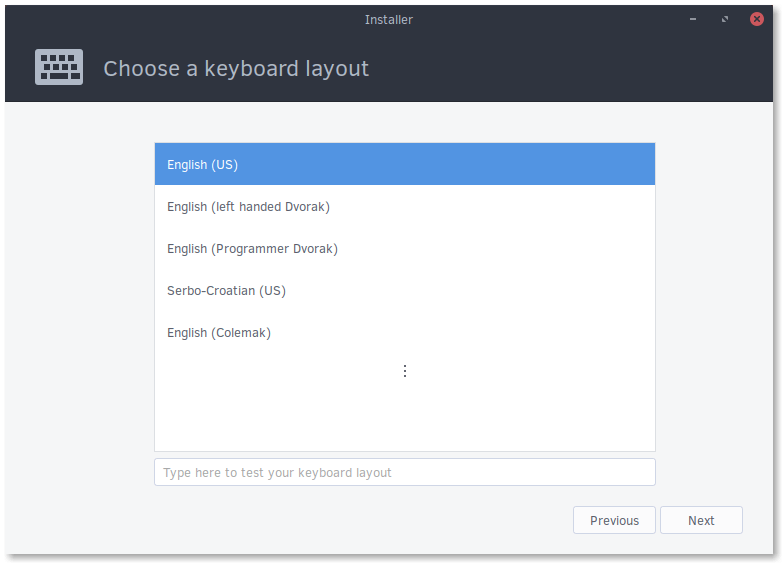 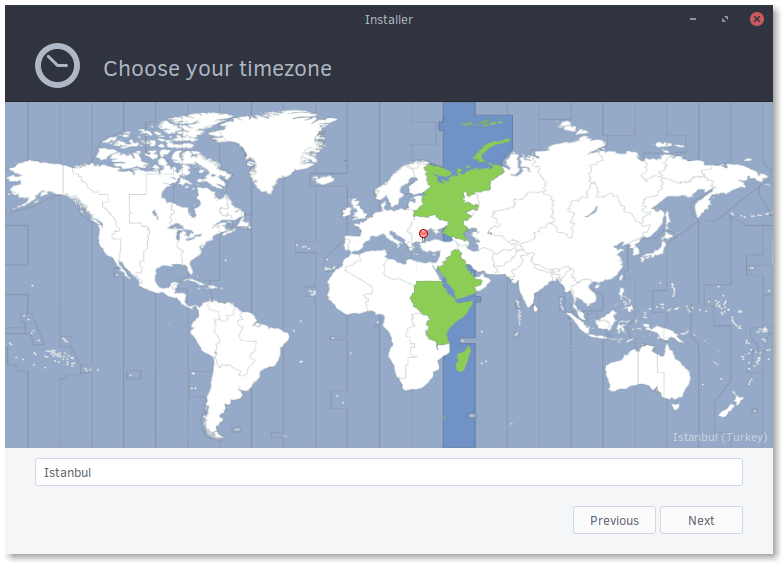 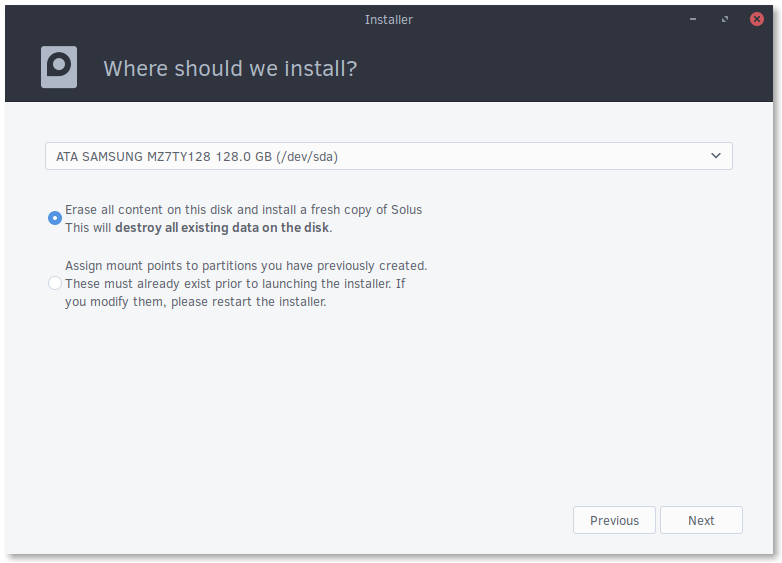 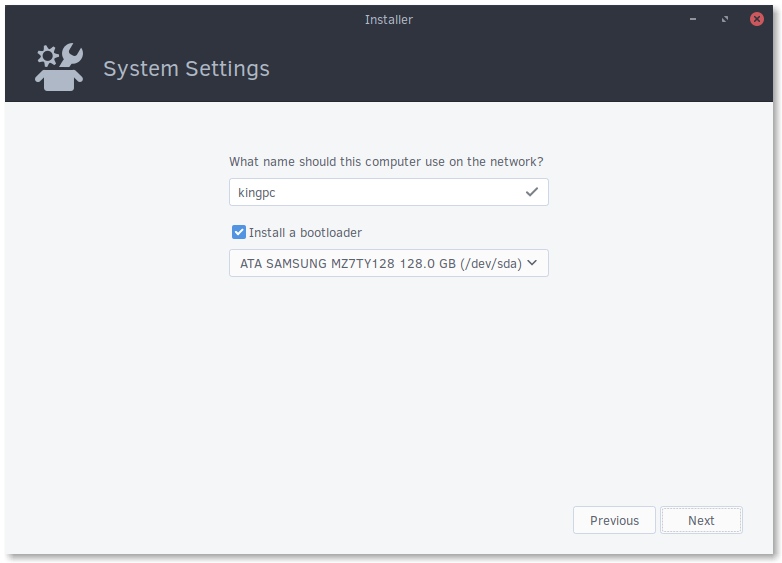 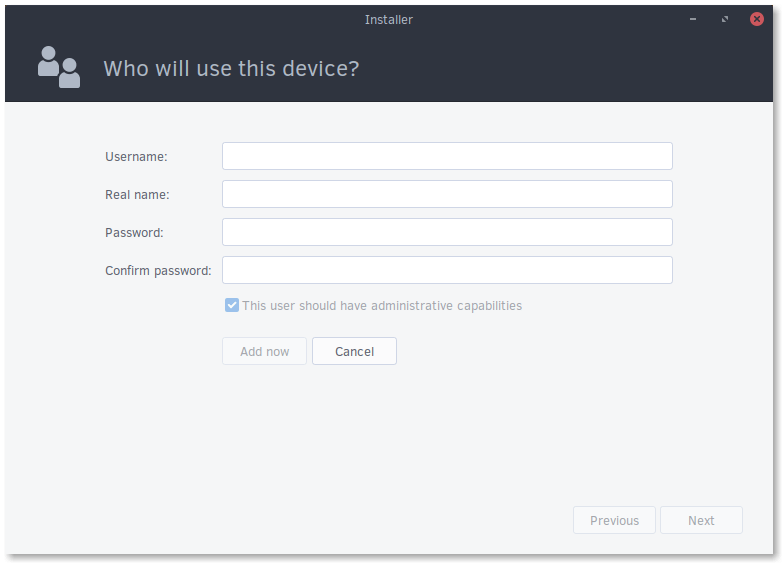 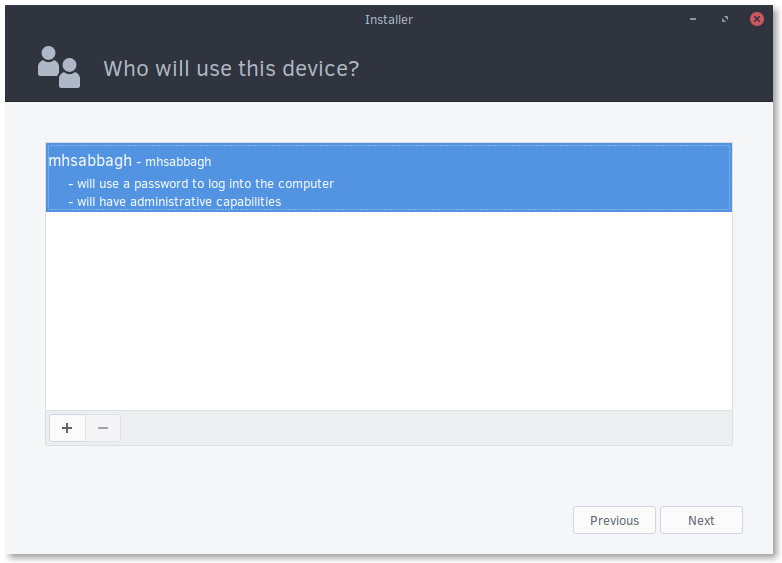 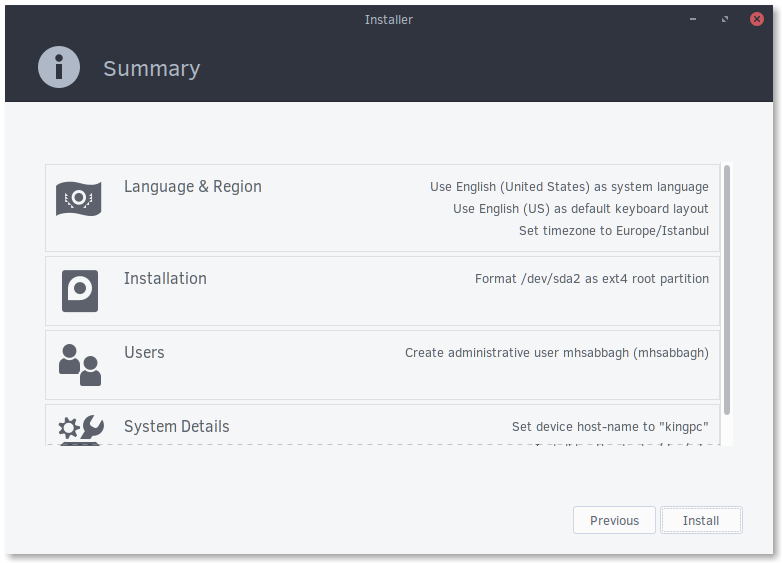 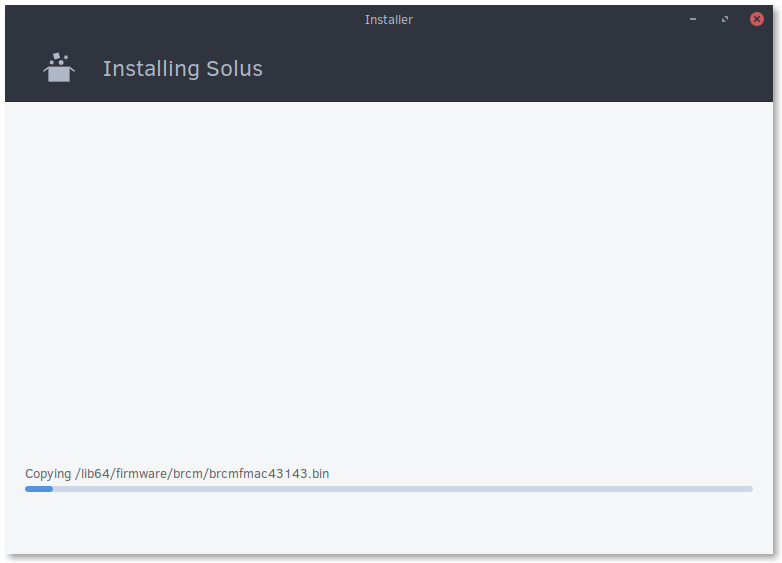 After the installation you can continue exploring from the live system or you can choose to reboot.

Again, we’ll meet the Budgie desktop. It’s really simple and clean. You only see the panel on top containing launchers and the system tray. And your wallpaper taking the rest of the screen. Desktop icons are disabled by default on Budgie (but can be enabled from settings). Just like GNOME Shell.

You can click on the top right icon in the panel to launch “Raven”. Which is a customization center built for the Budgie desktop. It allows to you adjust settings, manage notifications, check applets or customize the user interface: 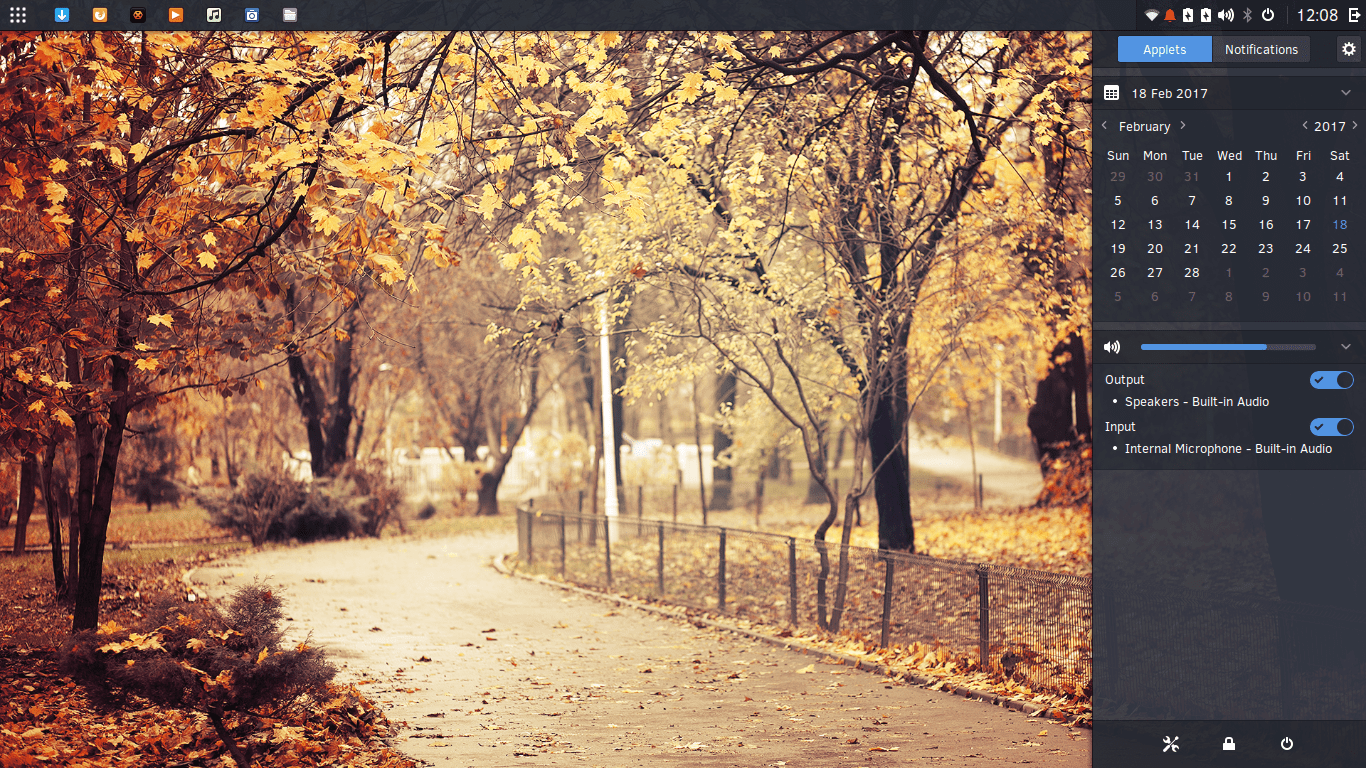 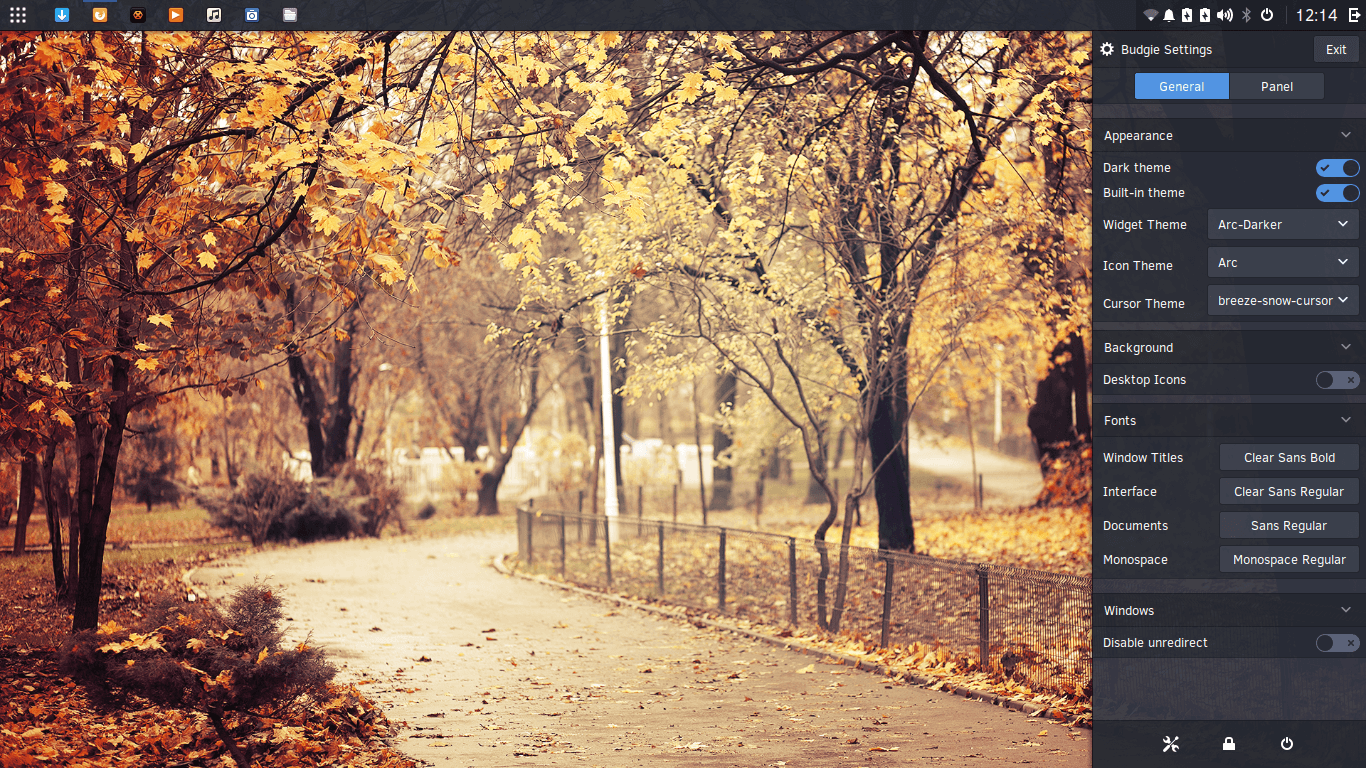 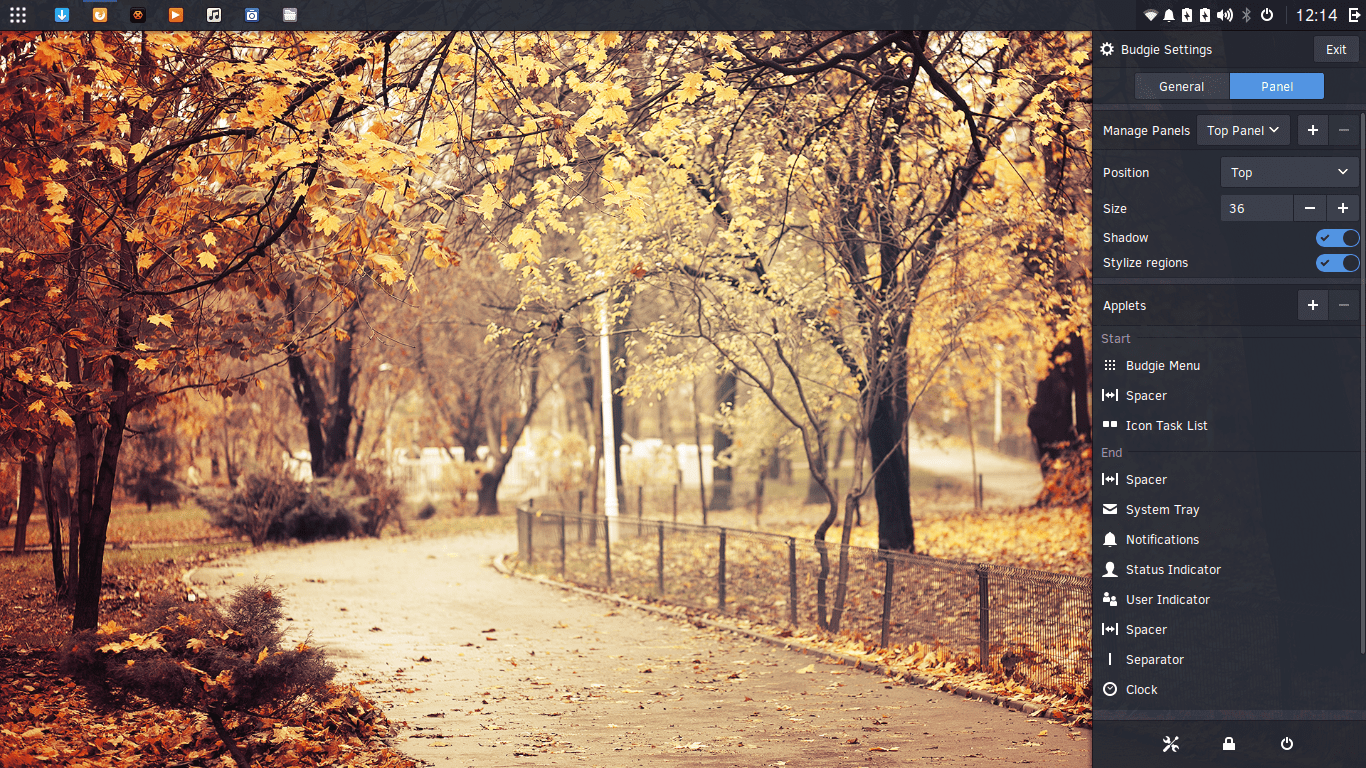 By default, the distribution comes with Firefox, VLC, Transmission, Thunderbird, Nautilus, Gedit, Rythombox, HexChat and some other small utilities for managing the system. That’s not bad for an out-of-the-box experience. However, no office suite is installed (even LibreOffice). So the user will have to download some additional software after the installation according to his needs.

This is Solus Software Center. It has very good user interface and provides a lot of functionality:

This is the single category page: 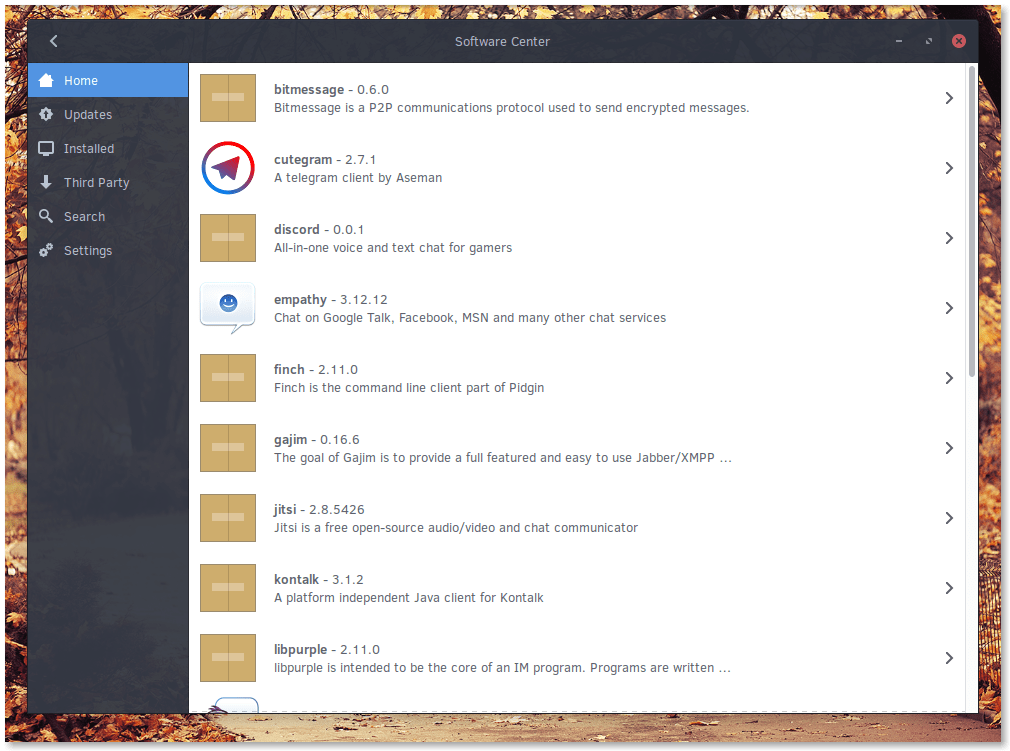 And this is how an application page looks like, adding some screenshots to this page definitely would be better: 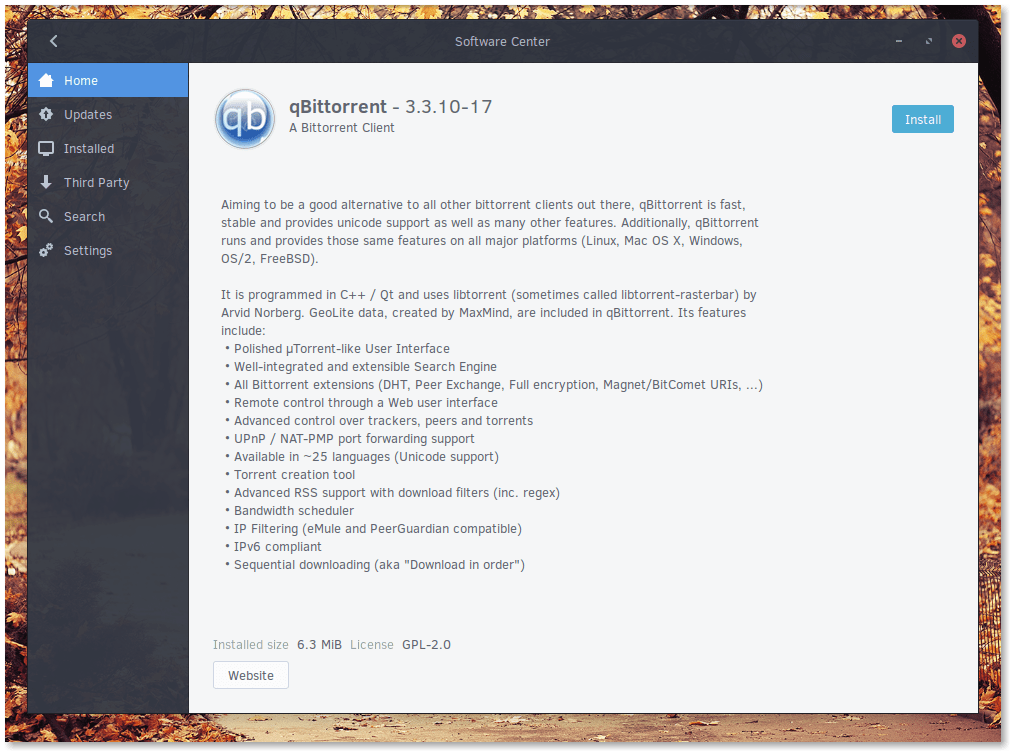 You can install some 3rd-party applications easily from the following tab with a single click: 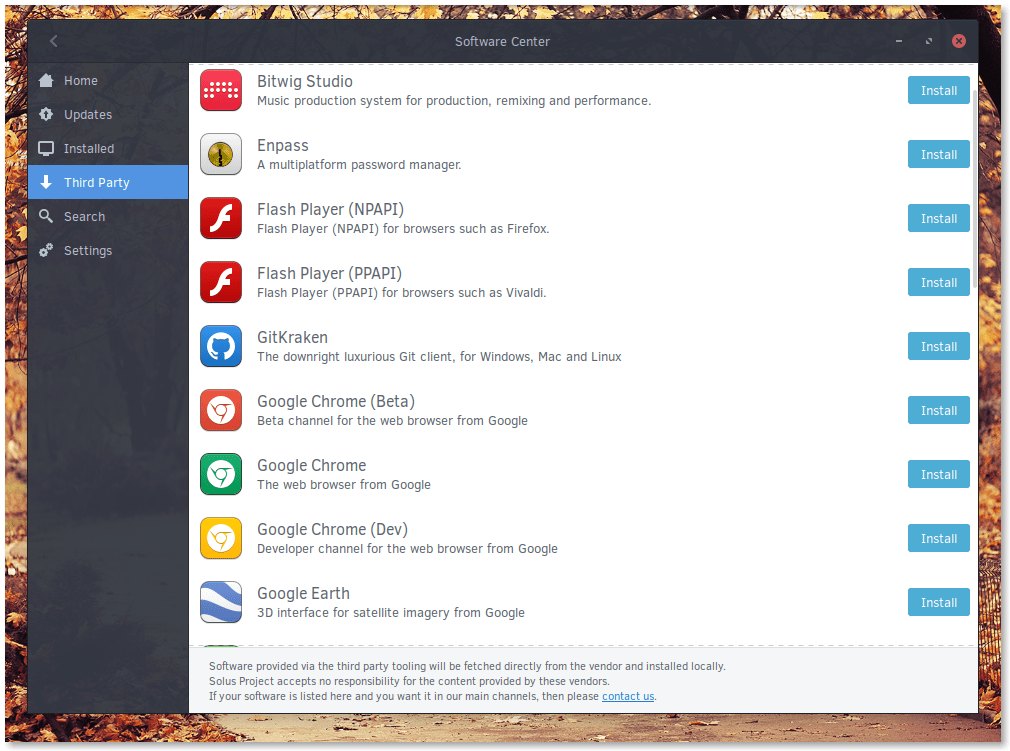 You can also search for applications or packages: 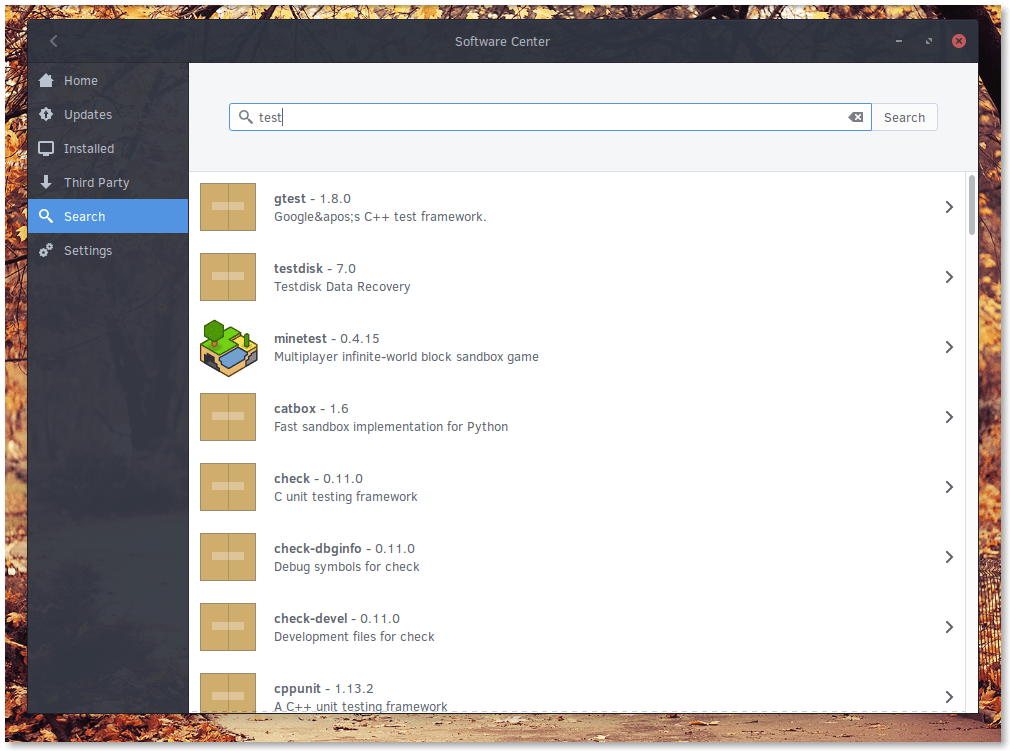 This is eopkg, the default package manager for Solus. It depends on the .eopkg binary format: 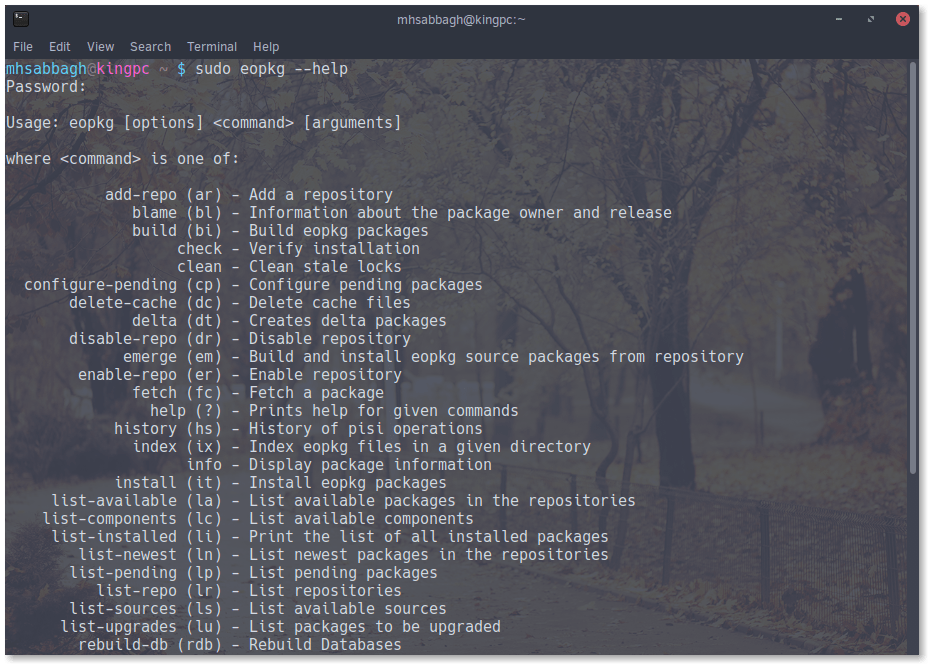 The commands are very similar to dnf or apt. You can install a package using:

Or to remove it:

To run a system-wide upgrade:

eopkg won’t be able to read or install .deb or .rpm files. Which is a big limitation if the package your are looking for doesn’t exist in the official repositories for Solus. Of course you can build it yourself or ask the developers to package the programs you need. But if you are on a hurry, you’ll probably face some problems because of that.

The main repository for Solus currently contains around 6500 packages1)By counting the package entries in the main repository file: https://packages.solus-project.com/shannon/eopkg-index.xml.xz . That’s definitely a great effort for an independent Linux distribution. However, if compared to Debian, Red Hat or SUSE. That number is small. And that’s natural for small communities unlike those 25-years-old big distributions. But was using an independent packaging system other than dpkg or rpm necessary in the first place? I doubt.

Since Python is lacking some efficiency – according to the developers – they are switching for another package manager called “Sol“. Which is written in C from scratch just for Solus. It’s still not default yet.

One of the nice things in the desktop is the usage of “Clear Sans” font. It gives an astonishing look and feel for applications everywhere on the system. It was really a great choice:

Solus uses some GNOME applications. This is Gedit. You can notice that all the settings are available from the menu to access. I hoped this would happen also on the normal GNOME Shell interface, but unfortunately, GNOME developers have their own way in life: 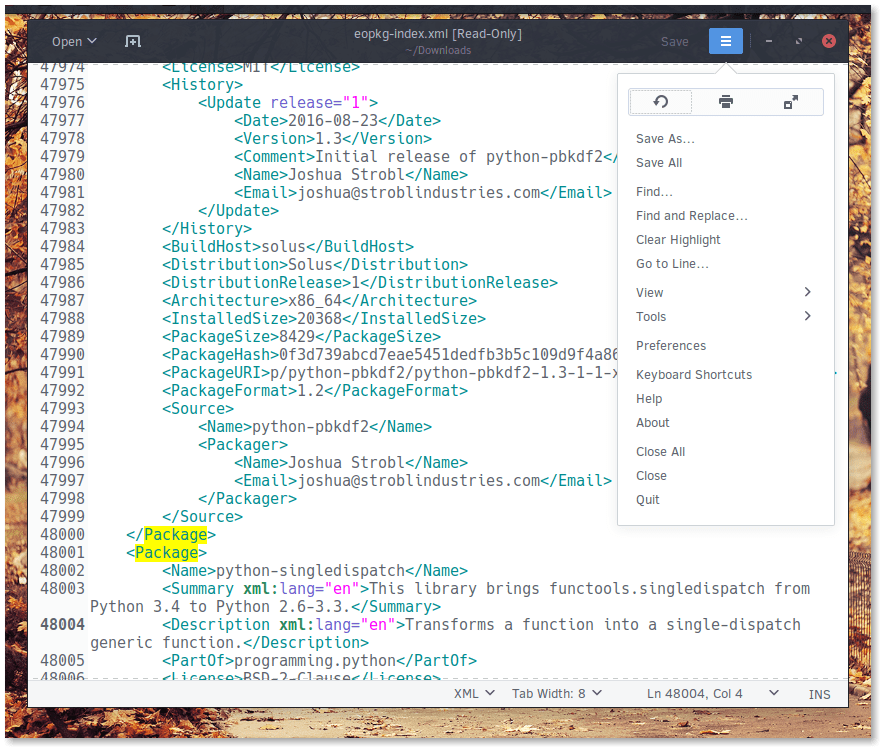 One of the main things about Solus is “software optimization”. You are using the same libraries and tools that exist on other Linux distributions. However, on Solus, they would give you better performance. Check the benchmark done using Phoronix test suite with Solus 1.2 to see some results.

As a personal experience, the system is ultra fast and lightweight. It actually uses around 300 MB of RAM (rest is cache) after booting up. This is the output of free -m:

The booting process takes around 2 seconds only to complete:

Those results were retrieved on a Lenovo Thinkpad x260. Which runs on an SSD drive.

There’s a small problem on Solus which prevents using Alt + Shift to switch keyboard layout language. Even after adjusting this setting from the control center, the problem is still there. You’ll have to use Super + Space.

Other than that, during the days and weeks of using the latest snapshot of Solus. We didn’t face a single bug or crashing in the system. Which is an extremely rare thing those days. 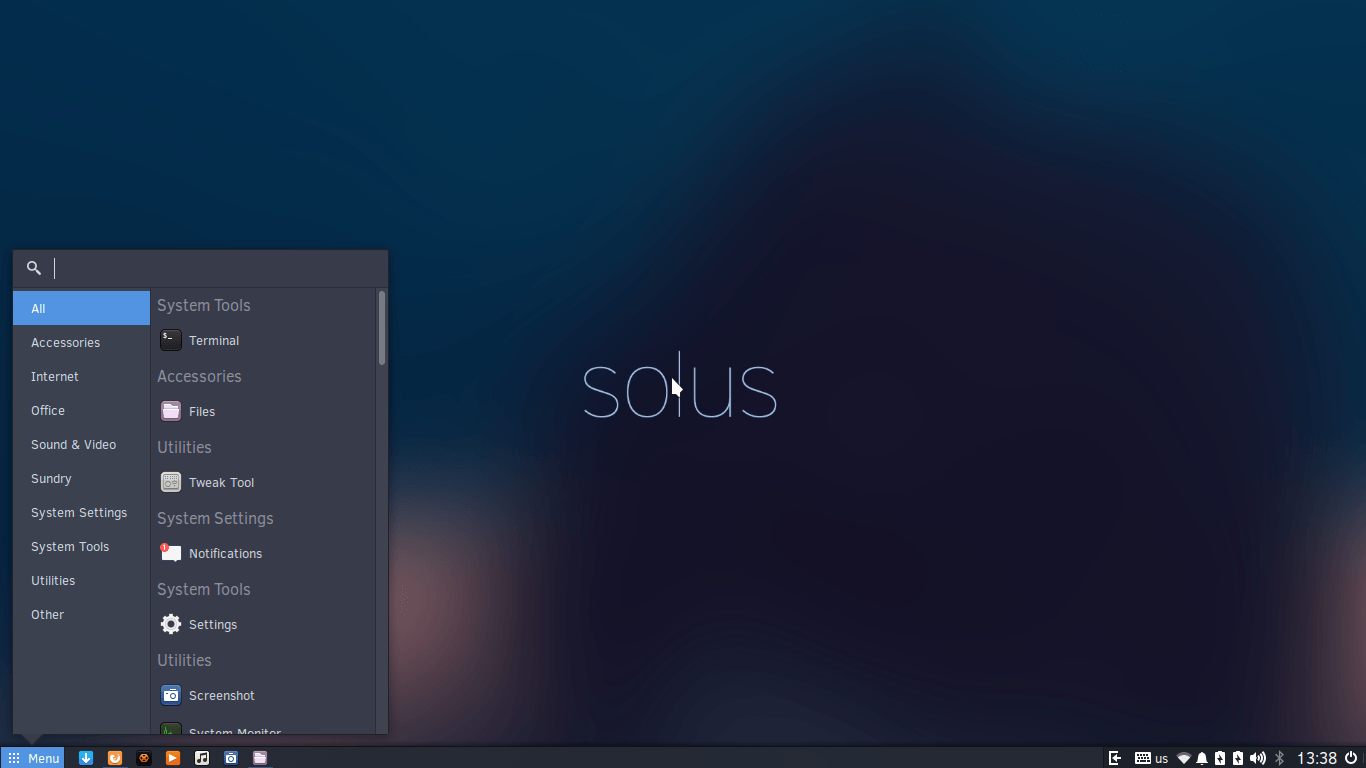 Solus is a promising Linux distribution. They have done a lot of work on developing and optimizing their own set of programs and libraries. The ultimate system provided to the user is bug-free and is well customized for end users. The operating system is also fast and lightweight. Building the distribution from scratch definitely was a good option for this one.

Because of the small size for the Solus community comparing it to Debian or Fedora, and because of its usage for its own packaging system. Some software and libraries may not be available. The distribution, however, provides most needed software for daily purposes in its main repositories. Which covers most of users needs.

You can go ahead and download the latest snapshot of Solus.

I tried Solus and immediately uninstalled. The live usb allowed me to adjust the display scaling so that I could see the screen. Once installed, that option is no longer available, and the screen is so tiny I can’t read it. I call that bait and switch. I would not recommend this distro to anyone.

Solus is the best os i ever use. Really smooth experience and work well in low-end devices.
https://www.youtube.com/watch?v=TGoqvR61dPM&t=84s

Solus is one of the best distro to date that I have tried, no issues at all with my hardware (which others had) and very stable. I use it as my main OS now (used to be a Windows user). The more I use it, the more i get to appreciate how polished, modern desktop that simply works and how this is a Linux distro that is built for end users (normal joe’s) in mind.

I have customized it to my taste, and its simply works. I have tried many of them out there before settling to Solus.