Ubuntu 17.10 Review: A Step In The Right Direction
Skip to content

The new Ubuntu experience is working well in the new release. GNOME on Ubuntu beside other upstream software could never be any better before. The distribution itself is stable for daily purposes. Definitely can be recommended for new & old Linux users.

Around two weeks ago Ubuntu 17.10 was released, finally allowing users to put their hands on the most modern and most changed Ubuntu release ever. Unlike many other Ubuntu releases, the Artful Aardvark was one of the most controversial works Canonical has created in years.

We have been following the development process for Ubuntu 17.10 for a long time. And been using the new operating system since the beta release. It’s a stable, smooth and solid release. This is our detailed review for what we have seen so far.

The most noticeable change in the new release is dropping Unity for GNOME Shell, and Mir for Wayland. Some people like that, others don’t. But we can’t agree more that it was a wise decision. Just as we suggested 24 hours before Canonical’s announcement regarding the topic.

Although Unity was an outstanding UI, it was being developed solely by Canonical. Unity 8 (With Mir) was also so far away from becoming mature. Users have been waiting for it since 2013, and they didn’t even manage to get a full-functional and a working release of it. Thus, sticking with Unity for the next two or three LTS releases wouldn’t take Ubuntu anywhere. It was definitely a hard decision for Canonical to drop everything they worked on for 7 years.

As for choosing GNOME Shell instead of KDE or Cinnamon, or anything else to become the default DE, it was also a wise decision. While we personally criticize most of the design decisions coming out from the GNOME team, we can fairly admit that it is one of the most mature desktop environments out there. Combining that with the new stable development cycle and expendable functionalities, GNOME was definitely a good default for most users.

The Ubuntu team tried to keep the Unity experience as much as possible when using GNOME Shell. They have forked the famous “Dash to Dock” extension for GNOME Shell, modified it and re-released it as “Ubuntu Dock“. It’s not installed as an ordinary extension in the normal user configuration files, but rather as a system-wide Debian package.

But there’s a sort of inconsistency when it comes to the app drawer button. For the last 7 years it has always been on the top left side of the launcher, but now, it became on bottom left. Such change is pretty inconvenient for ordinary users. You can of course get it back, but it should have been the default: 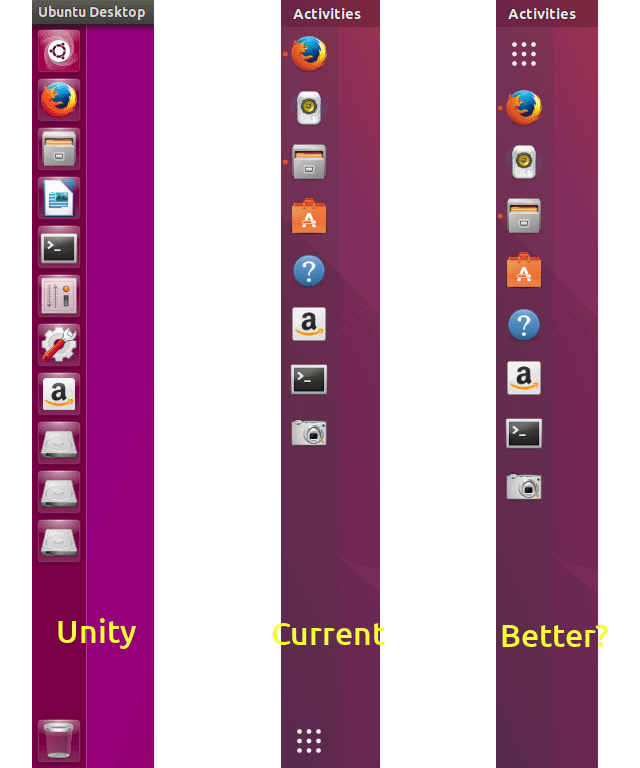 Same is true about windows controls. They are now on the right instead of being on the left for the first time in 7 years. There’s no technical difficulty preventing from using these options by default to match the old Unity experience.

LightDM was replaced by GDM. But they could have used a wallpaper instead of that solid purple color, no? Sadly there’s no way to modify it from control center:

Resources consumption on GNOME Xorg & GNOME Wayland session is the same: Around 1.4GB of RAM. CPU depends on what you are running.

As for the Wayland session on Ubuntu, it does suffer from many problems like non-working administrative applications (Synaptic & GParted), non-free video drivers not working and some other stability problems. But these issues are not Ubuntu-specific; These issues are related more about the architecture of Wayland protocol, not the hosting distribution. Same issues do exist on all other distributions running GNOME Wayland. It’s better to keep using the GNOME Xorg session at the moment.

GNOME Shell 3.26 on Ubuntu comes with the following Ubuntu-specific patches. Many of them were upstreamed (sent to GNOME team to include it for all distributions). Here are some important ones:

If you would like to get a vanilla GNOME experience, you can install the gnome-session package from the software center or via the package manager, and then you’ll see a “GNOME Session” option in the login window. As for GTK+ 3.22, there’s also a number of Ubuntu-specific patches. Most of them are Wayland-related or old Unity patches.

Apport, the Ubuntu bug reporting software, no longer pops up every few minutes to report about an normally operating application. For the first time of my personal usage for Ubuntu in around 8 years, I can finally stop recommending removing Apport.

Snaps are integrated into the Ubuntu Software Center (Same as GNOME Software with Ubuntu branding). Meaning that you can search for Snaps or install them directly from there a. But some highlighting is required in order to determine trusted snaps & ordinary packages from unknown snaps:

Currently, there are around 58000 packages available in the official Ubuntu repositories.

We didn’t face any bugs or blocking problems while using the new release. Everything is just working as in anywhere else. This, of course, can be different in your situation according to your usage scenario.

The new Ubuntu release is more stable and upstream than ever. While it brings many controversial software & design related decisions, it remains a usable Linux distribution which can be depended on in order to do daily work. It’s also free of a lot of bugs that existed in the previous releases.

The new Ubuntu experience is working well in the new release. GNOME on Ubuntu beside other upstream software could never be any better before. The distribution itself is stable for daily purposes. Definitely can be recommended for new & old Linux users.

Benjamin Christensen February 12, 2018
|
Thanks for the review - I have just installed it after a long break from Ubuntu - and things have goon pretty smoothly so far! Managed to recreate my workspace setup (Brackets / Vagrant / Virtualbox / Ansible / DrupalVM) from Mac in a few hours). And even the nvidia graphics / Bumblebee nightmare I got so tired of with the previous versions was fixed without too much hassle!
0 0
0
Reply

M.Hanny Sabbagh February 13, 2018
|
Benjamin Christensen Thanks for the review - I have just installed it a
Great to hear it's working good with you!
0 0
0
Reply

jacques February 21, 2018
|
Sorry to spoil the party. I have been using Ubuntu since version 8. Great OS. However, versions 17.04 and 17.10 are glitchy and full of bugs. I tried on 3 different laptops with the same results. Constantly dropping Wifi, black screen and the list goes on. Yes, I tried the help files and visited the Ubuntu community. What I found is many upset users and no one has a real fix. Time to move on and I am done with Ubuntu.
0 0
0
Reply