So.. You are a new Linux user and you are wondering about what’s called “Linux command line”, or you would like to learn more about Linux commands in general.. Right? This article is for you.

Linux command line is very famous for its extreme flexibility in doing tasks. One or two commands are enough to do the wonders on your system. Such feature barely exists in other families of operating systems like Windows (PowerShell is very limited in terms of usage), which is why you must learn how to use it if are going to use Linux.

Let’s start by introducing you to the topic.

Let’s start first by introducing you to the term “Unix Shell“. A shell is a command line interpreter that provides the user with the ability to manage the system using commands he enters. You can think of it as some sort of communication channel between you and the operating system. It’s called a shell because it sits around the operating system’s kernel and covers it just like a crab would take cover by his own shell, hence the name.

In it’s design, Unix had what’s known as a Unix shell, which is the language the user writes into the console in order to make the system operate in various ways. You can enter these commands directly in the command line prompt, or save them into a file and execute them later, the latter is known as “shell scripting“.

There are many various Unix shells out there, not just one. Each has its own features and disadvantages. The most famous shell however is called “Bash“, and is almost installed by default in all Linux distributions, which is the main topic of our article. When somebody refers to the Linux command line, they are probably referring on how to write Bash commands and Bash shell scripts.

You can automate many stuff in your life using the command line, like downloading/taking a backup of a set of files you need, getting various important information from all around the web and reporting them to you, scrap information from certain aspects of your system and store them in a certain way or any other thing.

You’ll also be able to do stuff way more quickly: Renaming 10000 different photos to a different name can be done in only 1 command. Converting  an .avi film into an .mp4 can be done in less than a minute. Separating audio and video in a file into 2 different files is so easy. Replacing a certain text in 1000 text document is also done in one single command. Searching for a specific photo/text/audio or any other kind of information is also so easy…

The possibilities are endless, engineers, doctors, university professors, students, IT people and everyone else are using the Linux command line to do basically everything they need in an easier and more quickly way.

After your system boots up (regardless of the distribution you are using), a new shell session is opened for you during the whole period of your usage. A shell session is basically an environment that allows your programs and other software on the system to communicate between each other and the system as a whole. You can open many shell sessions at the same time, and some of them may be parents of other sessions, which for example will cause your currently running processes to be terminated if you terminate the parent shell session.

Let’s start by opening the “terminal emulator”, which will create a new sub-session for you in a window. Search for “Terminal” program in the applications menu of your system and see if you can find it. For example, GNOME Terminal program: 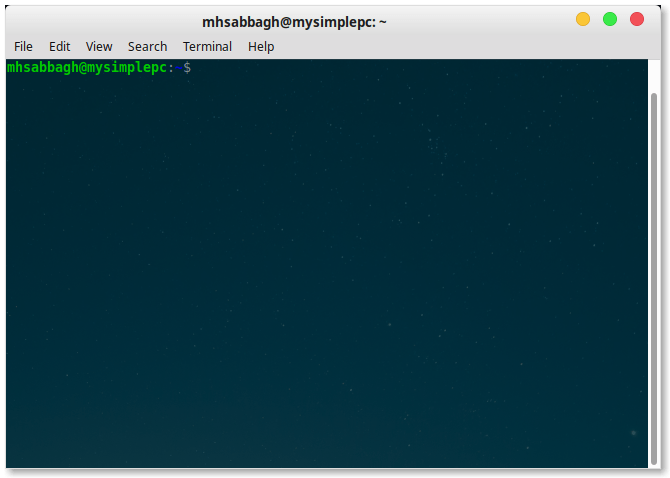 The first thing you’ll see in most terminal emulators is the text put before each line you write in the terminal, which conists of 3 parts:

Let’s start by writing a simple command, like the following one:

The previous command consists of two things: The base command cd, and the argument that you pass to it which is /home/. After you write the command and you hit the “Enter” button on your keyboard, you will notice that the current folder of your shell session was changed into the /home/ folder, meaning that /home/ is becoming your current working directory.

In so many cases, you can pass more than one argument to a command to make it do many things. For example, the following command will list the contents of both the /etc and the /home folders:

You can also pass options (or multiple options) to the commands. For example, the -a option, if added, will display the hidden files (which have their names started with a .):

There are so many special “hacky” symbols that you can write in your Bash to do stuff more quickly. Here’s a quick list of them with details:

There exist a legendary command called man that would show you all the available documentation about a specific command. For example, you can run the following commands to see the documents:

You can browse the documents using the Up and Down arrow keys on the keyboard, to exist, you can just hit Q.

Here are many examples for various Linux commands divided by category, use what you need:

The Unix design philosophy includes a rule that says that “everything is a file“. This means everything in your PC, whether it was your keyboard, mouse, graphics card, USB sticks, monitors, shell sessions, input/output operations, processes, programs and everything else whether it was software/hardware are all represented as files somewhere on the filesystem. This means that you can access/manipulate any part you would like via just accessing these files in a specific way.

This also applies to Bash, there are many configuration files located all around your system which you can modify in order to do certain things on your OS. Here’s a table of these files and what they do:

One famous trick to shorten the long commands that you usually write into smaller ones is using the alias command. For example like this:

The next time you enter the update command in your terminal emulator and hit Enter, your Ubuntu-based system will update its package information. This is very needed if you usually write long commands every day to do certain tasks. Put the previous command as it is to the end of the ~/.bashrc file and it will be permanent (because if you don’t the shell will forget your alias once you close it):

A shell script is nothing more than just a file that contains a set of Bash syntax/commands in an organized way to do a certain task. You literally just open your text editor, write your commands there and save them with the .sh prefix (like test.sh) and run them later anytime you want from the terminal emulator.

You can put the # symbol anywhere you want in Bash so that anything after it in the same line is counted as a comment, not code. An exception from that is if the # symbol was followed by ! in the first line of the file, which means that you are telling the shell which shell you want to use to interpret the shell script (maybe you don’t want to use the current one?).

A Bash script starts with the #!/bin/bash line. This is important so that you specify the path for the shell that you want to use to execute the script, because for example, you may want to use a different shell like /bin/zsh or /bin/dash to execute the script if you need that (but of course they may have a different writing syntax, so you should check for compatibility first). But almost in all cases, you won’t need to use anything other than Bash throughout all your Linux career. Also, almost in all Linux distributions and some other Unix-like operating systems, the Bash default location is in /bin/bash (So you don’t need to do any modification).

Open your favorite text editor, and write the following commands:

And save the file as test.sh in your home folder. Then open your terminal emulator and run the following command to run your Bash script:

The source command executes a specific file that you want in the current shell you are running. Here you are just telling your current Bash shell to execute the file for you. An abbreviation for the source command is the dot (.). Meaning that you can write the previous command like this:

You can also execute a script like ./test.sh, but in this way, the shell will run the script in a new shell, not in the current one. Also make sure that have navigated to the current directory of the shell script before writing ./test.sh. (Or, you could write the full path: ~/test.sh).

You can also define/access variables in Bash, and you can print them using the echo command. Here are some examples:

Notice how some of these will give you a correct output, while the last of them will not. You need to be very careful in the way you write Bash commands and scripts; each space and each symbol is very important. For variables, we use the $ symbol to refer to a variable. The string quotes for example are important, look the following example:

In the last case, Bash won’t process the variable, but it will print the sentence exactly as it’s inside the quotes.

Some variables are very helpful in Bash. For example, the $HOME variable is the path of the current user’s home folder. So you can use it this way to access it:

You can print all the currently defined variables in your current Bash session via the following command:

There are so many books, videos, courses and online tutorials to guide you through learning the Linux command line. Here’s a small list of them to get you started:

If you have reached this far, then you should have a good experience about Linux commands, what are they and how they work. Read the books that we previously recommended so that you learn more. Additionally, you may follow the following Twitter accounts for day-to-day learning and interesting tips and tricks about Linux command line:

If you have anything unclear in your mind about the topic, or you have any note/comment about what’s mentioned in this post.. Let us know below!