Who wins a battle between Linux Mint vs Ubuntu? Which one is better?

Ubuntu is the most famous Linux distribution in the world. Its development started back in 2004. It is based on Debian distribution, which is why Ubuntu also uses the dpkg packaging system (And .deb package format) along with the apt packager manager.

Linux Mint, on the other hand, is based on Ubuntu. Its development started in 2008. Hence, Mint by extension is also based on Debian, and uses the same package manager and packaging system.

There are many key and minor differences between Linux Mint and Ubuntu. But often, the question comes to: Which Linux distribution should a new Linux user use on daily basis? Ubuntu or Linux Mint?

To answer that, we will be comparing both distributions by many different criteria in this article.

10 Differences To Decide Between Linux Mint vs Ubuntu 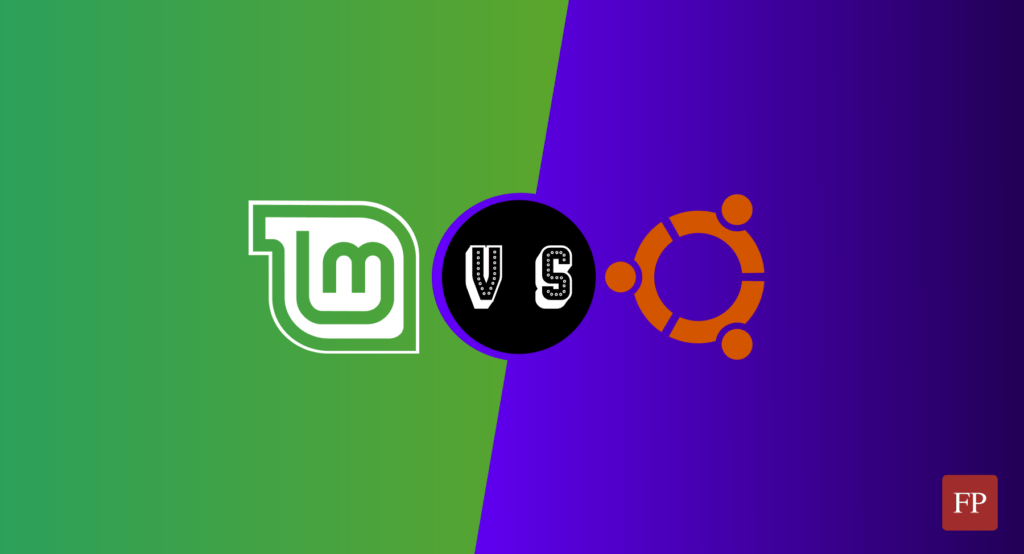 Since Linux Mint is based on Ubuntu, you will notice that both distributions are generally the same. However, there are some key differences between them in some areas.

Ubuntu does not aim to be a simple Linux desktop distribution. Instead, Ubuntu is a general-purpose Linux distribution that can be used on servers, cloud, IoT and embedded devices.

Linux Mint, on the other hand, is nothing more than a desktop Linux distribution. There are no Linux Mint versions for servers or cloud or IoT… etc.

That’s why you will notice that Linux Mint is more suitable for new Linux users and those who do not have any experience in it. Because the developers objective is to solve this use case only, and nothing more.

Ubuntu is based on Debian, and Linux Mint is based on Ubuntu. This means that you can generally install any .deb file on all of these distributions.

PPAs, or Personal Package Archives, are software repositories designed to deliver packages to Ubuntu users. And while this feature was mainly made for Ubuntu, Linux Mint can take benefit of it as well, because it is based on Ubuntu.

Which means that you can add PPAs to Linux Mint in the same way you add them to Ubuntu. Hence, you basically get access to the same software catalogue whenever needed and no matter the distribution you choose. It could sum up to more than +60000 available packages on both distributions.

However, put in mind that because of dependencies differences, some PPAs or some .deb files may not work on Linux Mint. The number of these is very few, but for example, installing the Unity desktop on Linux Mint may give you a broken system, although the Unity desktop is coming from the official Ubuntu repositories.

Dependency differences happen because Linux Mint may require version Y of the X package to be present and installed so that the system works as expected, but Ubuntu may require version Z of the same X package to be present. And if you add a PPA that strictly requires the same Ubuntu version over the Linux Mint version of the package/dependency, then there are going to be problems in your system.

But again, the number of these cases is very small, you may never stumble upon it while you use Mint.

Snaps and Flatpaks are new app formats for software distribution in the Linux world. They are self-contained, compressed, sandboxed packages that can be installed on any Linux distribution.

Ubuntu comes with Snaps support by default, which are:

On the other hand, Linux Mint comes with Flatpaks support by default, which means:

There are many differences between the two app formats, but regardless of them, you can easily install any app format support on any Linux distribution you choose. E.g you can enable Snaps on Linux Mint, or choose to enable Flatpaks on Ubuntu as well.

Nothing stops you from using both of them on your system at the same time too, but it’s just the matter of the default choice.

In any case, most Linux users still prefer traditional package formats like .deb and .rpm over the new app formats like Snaps and Flatpaks.

Linux Mint comes with many more preinstalled applications than Ubuntu. This is because Ubuntu is a general-purpose distribution, and hence does not contain anything more than the bare-minimum number of applications by default.

Linux Mint, on the other hand, has its own:

In fact, most of the desktop applications shipped in Linux Mint are developed by the Linux Mint team too. While Ubuntu tends to ship general tools which are available on other Linux distributions as well.

This is one point which makes Linux Mint better than Ubuntu for beginners; because it contains more helping tools and utilities to manage and control the system more than Ubuntu by default.

Officially, GNOME is the only supported desktop environment by Canonical (The company behind Ubuntu).

There are other Ubuntu flavors which come with other desktop environment such as Kubuntu, Lubuntu, Xubuntu, Ubuntu Unity, Ubuntu MATE and others, but these flavors are developed and maintained by the community, and not by Ubuntu.

Of course, you can install any desktop environment you wish on your Ubuntu desktop, and same thing applies to Linux Mint.

You may choose whatever default option you like from these.

GNOME is a more resource-hungry desktop environment. A side effect for it being modern and customizable by hundreds of GNOME extensions and themes, and offering its ever-changing user experience.

MATE, Xfce or even Cinnamon are generally more lightweight than GNOME, and hence, they work better on older hardware. These desktops may have a fewer number of extensions than GNOME, but they focus on maintaining the same user experience across different releases (E.g no huge updates that change how you interact with the desktop and do your work).

The choice of the default desktop environment to use could be key to how you use your computer. At the end, you want to do real work, not miss around with extensions or other options.

In this regards, Linux Mint is better for the long run.

It is true that you can add many GNOME extensions to your Ubuntu desktop, but that’s it. You will be very limited in the other ways to customize it. The distribution does not come with additional tools or options to modify other aspects of the system, and hence, you are limited by whatever extensions you may find.

On Linux Mint, customizability is more fruitful. Both Cinnamon and MATE desktops, and even Xfce, offer special tools and options to modify their settings or change the look & feel however you like. But GNOME, it is a known fact that the available settings are limited by design.

Mint Control Center also allows you to download applets, extensions and themes directly from the same control center and use them instantly, which saves you a lot of time.

It is true that Ubuntu with GNOME can be customized to a similar extent with extensions as well, but for a new user, it could be tricky and time-consuming to keep playing with extensions until you reach the setup you like.

As you should have known by now, Linux Mint is more suitable for older hardware than Ubuntu.

Ubuntu would need the following hardware requirements to run:

But Linux Mint can work on older hardware with the following requirements:

However, it is worthy to note that Linux Mint had many issues with AMD processors and AMD graphics cards in the past. Sometimes, the distribution may not even install. This could be changing nowadays, but make sure you test the distribution heavily before you settle on it for your daily work. 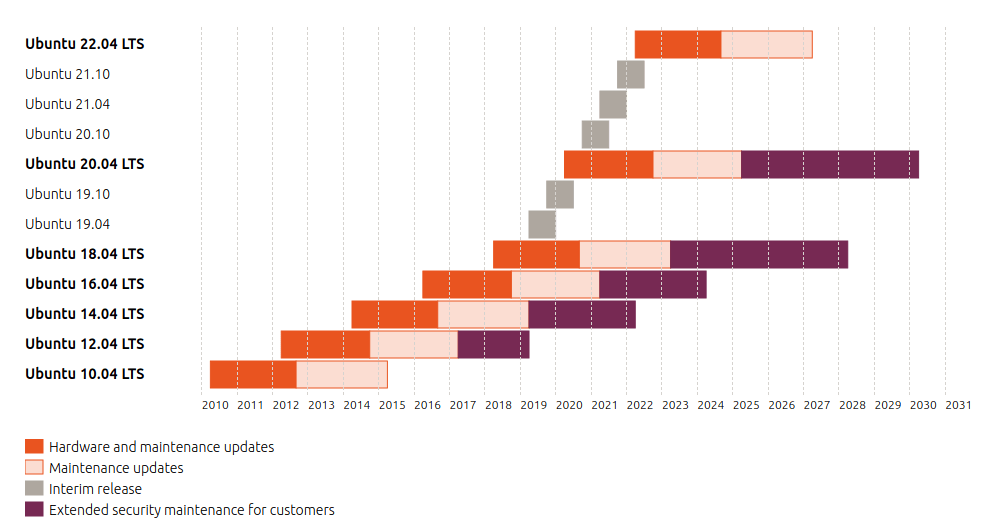 There are 2 types of Ubuntu releases:

The Ubuntu ESM program is generally for enterprise and business companies, but it is free for individual users with up to 3 machines. All what you need to do is to sign up on their website and link your Ubuntu installation with your account in order to activate the extra support period.

Linux Mint is based only on the LTS versions of Ubuntu, meaning that every Linux Mint release also gets a 5-year support period. You can also choose to enable the ESM feature on your Linux Mint installation if you wish, so that you get 10 years of updates and support!

Ubuntu is the most famous Linux distribution in the world.

As a result, it has a huge number of community users answering and asking questions on their official forums and AskUbuntu website, which means that you can easily get an answer for any problem or issue you may face on it.

Linux Mint, on the other hand, is much smaller in terms of community size and user base. Still, Linux Mint is the 4th most used desktop operating system in the world, right after Ubuntu.

It may take you more time to get answers to your issues or questions on the Linux Mint forums and other websites, but since Mint is based on Ubuntu, then you can generally use the same Ubuntu channels to get the help you need.

At the End: Linux Mint or Ubuntu?

So to sum up, if you are a new Linux user and a beginner in the open source world, then Linux Mint is better than Ubuntu for you.

We keep recommending Linux Mint for any new user to the Linux world, thanks to its development team’s commitment to make the distribution as much user-friendly as possible.

But if you want to learn Linux the “normal way”, and use the same platform used by millions of other people around the world, then Ubuntu is the most supported and commonly used Linux distribution out there.

At the end of the day, both distributions are free; you can try both of them by yourself and stick to which one you like the most.

pdaliu November 25, 2021
|
Timeshift is default in Linux Mint, which is a must-to-have app.  That's the major reason I love Linux Mint, though you can surely install it on Ubuntu with PPA, too.
0 0
0
Reply

longshots November 25, 2021
|
You forgot to mention the screensaver - which is a dirty word in the linux world. I'm fully aware of all the arguments for and against a screensaver, but it's eye candy that many users prefer to the alternative. Thankfully xscreensaver is an easy install in Linux Mint.
0 0
0
Reply