If you are someone who’s interested in creating 2D animation, whether as a hobby or part of your job, then you would be glad to know that there are many open source 2D animation software to use.

In this article we’ll see 5 of them. 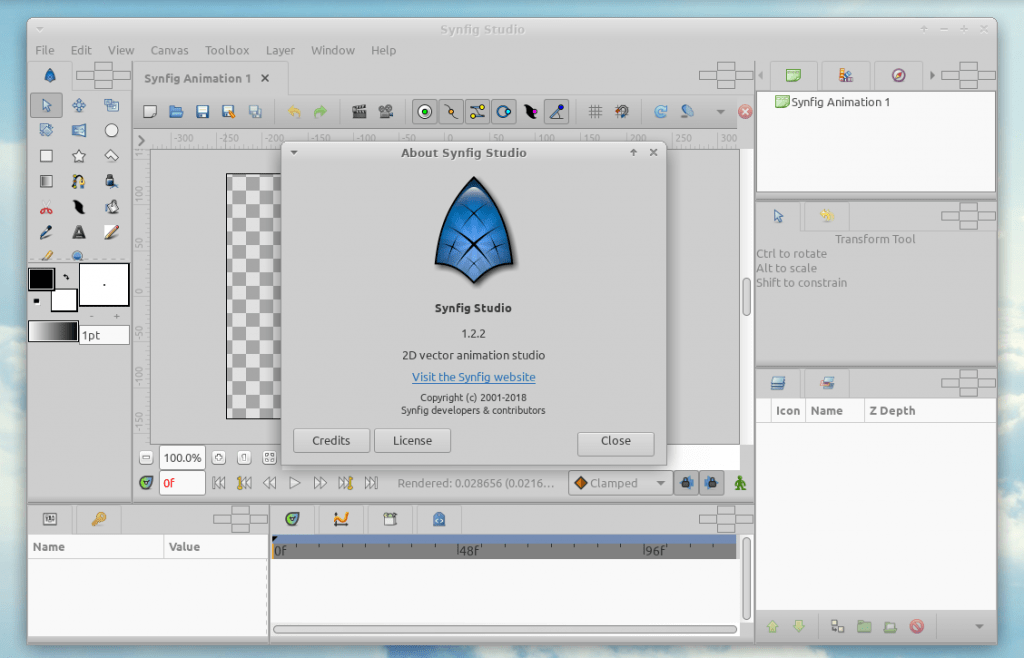 Among Synfig features we can see vector tweeing, which would save the animator a lot of time and work on switching the movements/motion between sequential frames, support of up to +50 layers objects, a bones system to simulate the human motion and control the body’s parts movements accordingly, and many other features. Synfig uses its own .SIF/SIFZ/SIFG formats for the data files it produces, and supports rendering the output in AVI, MPEG, GIF, Flash and many other formats. It also supports importing Inkscape’s SVG files so that you can use them in your work. Synfig supports gradients, shadows and real-time effects.

Originally named as the “Toonz” program and initialized in 1993 as a proprietary software, this program became open source in 2016 and licensed under the BSD license. It was hence named “OpenToonz“.

You’ll find all the basic features in any 2D animation software available in OpenToonz as well; painting tools, frames manipulation, tweeing, motion capture and simulation support. However, what makes OpenToonz special is a set of addons/plugins that can be installed to the program, such as Effects SDK which can employ deep machine learning to synthesize the effects of two images to produce a fusion image of them or even automatically add some effects according to your needs, or GTS which is a scanning tool that allows you to scan an image and control/copy its properties instantly, finally there’s a plugin called “Kumoworks” which allows you easily to create clouds in various shapes.

TubiTube Desk doesn’t focus on being a professional 2D animation program, but instead, it’s targeting children, hobbyists and amateurs. Its user interface is quite simple, and the program itself only offers the basic features of any 2D animation program, such as the painting/drawing tools, support for importing vector/image files in many formats from other programs, support for rendering the output work in AVI, MPEG and SWF, and manual tweeing, scaling, rotation and opacity.

The program features a very simply and lightweight UI, and just like the others, it has all the tools necessary for painting, as well as layers support, multi-frame operations support, importing/exporting in various formats and many other nice features. The community behind the program also provides a huge set of free tutorials and documents on how to deal with the software, as well as a forum for support or other questions that you may have.

As you have seen in this post so far, there are many 2D open source animation programs to use. But in general, and to be completely honest, they are not in the same level as the proprietary/paid ones such as Adobe Animate, which is understandable since the developers of those programs are doing it for free, and aren’t getting paid for their work.

However, those tools should be just enough for doing your basic work as a hobbyist or someone who would like to just see how this industry works.

Become a Supporter
It is OK to use an adblocker for your comfort, but kindly consider leaving a one-time donation or subscribing to our Patreon campaign for $5/mo so that we can keep providing you a content you enjoy.
Submit

Cory June 27, 2019
|
I'm a professional animator, and I'll say that this article is missing the two absolute best open source 2D animation tools. That's Blender (with it's amazing Grease Pencil tools) and Krita (which has features akin to TVPaint.) Blender is literally being used in studios right now, Even for 2D. So I think those are both must mentions.
0 0
0
Reply

M.Hanny Sabbagh June 27, 2019
|
Cory I'm a professional animator, and I'll say that thi
Thanks for your comment, but neither Blender nor Krita are dedicated 2D animation apps. Krita for example is a painting app and happens to have a plugin/setting to support frame-by-frame motion, but it's missing out tons of features that are in any normal 2D app, which is normal because it doesn't even mention "2D animation" on its official homepage. There's no way you can consider Krita to be an alternative to Adobe Animate for example. Blender is indeed very widely used in studios, even in making some multi-billion dollar movies. But again: Blender is a 3D design program, not a dedicated 2D animation program, which what this article is talking about, and why it doesn't exist in it. Just like GIMP, which indeed for example can be used to create some GIF animations, but it's not a dedicated program, it's main usage (and 100 lines under main usage) is for image manipulation/drawing. Thanks again.
0 0
0
Reply

Giacomo Z. October 9, 2019
|
M.Hanny Sabbagh Thanks for your comment, but neither Blender nor K
are you kidding? Sure, 2D animation is mentioned in feature highlights at https://krita.org/en/features/highlights/ There is a chapter "Simple and Powerful 2D Animation" and a 11 minutes video that was already online when you wrote this answer. :)
0 0
0
Reply

M.Hanny Sabbagh October 9, 2019
|
Giacomo Z. are you kidding? Sure, 2D animation is mentioned
Way to miss the point buddy. Krita doesn't identify itself as a 2D-animation oriented software, it identifies itself as a painting app. You are like including Firefox in the list of "PDF readers" simply because it has the ability to read PDFs beside other PDF addons, but including a web browser in such list is quite useless for anyone searching for an article on Google on PDF readers, despite the fact that it actually works.
0 0
0
Reply

Steve June 27, 2019
|
Thank you for the article, but excluding one of the best open source 2D animation tools, Blender, simply because it is not "dedicated" to 2D is some really odd kind of stubbornness. Most 2D animation films are now animated using 3D animation software... heck even a cheap 2D cut-out animation shows like South Park was animated using 3D software Maya since the 90s.
0 0
0
Reply

M.Hanny Sabbagh June 27, 2019
|
Steve Thank you for the article, but excluding one of th
Including a fully-featured 3D tank power in the list of 2D animation software along things like Pencil2D and TubiTube Desk is just out of sense. Even if it works, and gives nice work, it's not even in the range of what this article is talking about. This isn't "What's the best open source to produce 2D animations" type of article, this article is specifically about software which is built ONLY to serve 2D animators, and Blender isn't one of them, not even close.
0 0
0
Reply

Arvin May 21, 2020
|
Synfig might more stable but Kage Studio is better vector animation software for beginners and way better than Pencil2D. Check it out on SourceForge https://kage.sourceforge.net
0 0
0
Reply

We use the following tools in our work: