If you are someone who depends on saving screenshots a lot in your work, then you would find the default screenshoot tools on Linux (Such as GNOME Screenshot, Kscreenshot..) very limited to your own daily needs. Those tools do not come with any features other than just taking a screenshot for some parts of the screen. Luckily, there’s a tool called Flameshot to solve this issue.

Flameshot is a cross-platform, free and open-source tool to take screenshots with many built-in features to save you time. The main feature you would like in it is that it allows you directly to edit the screenshot you took; You can add blur effects, texts, shapes & arrows with all the colors you want just directly after you take it. This doesn’t happen in a new window, but rather on the desktop where you tool the picture itself.

The program offers the following features:

See this video that we created for a demonstration of its features:

The UI and other options of the programs are customizable using a preferences window:

How to Install Flameshot

Flameshot is available on most Linux distributions. To install it on Ubuntu, run:

To install Flameshot on Fedora:

Flameshot is also available for installation on Windows (choose your arch, and then scroll down to the end of the huge output and you’ll see the download link, right now it’s here for x64 bits), and can be built from source on other platforms too.

Alternatively, you may grab some RPM, DEB and AppImage files directly from the project’s page.

Configure Flameshot to Work When PrintScreen is Hit

To do this, depending on your desktop environment, open your Keyboard Shortcuts window and add a new shortcut like this:

The command should be flameshot gui. Then once you add it, you can make its keyboard binding equal to the PrintScreen button by simply hitting it (after you select adding a new keyboard binding).

Now, each time you hit PrintScreen, Flameshot will start!

Flameshot offers the following keyboard shortcuts for itself: 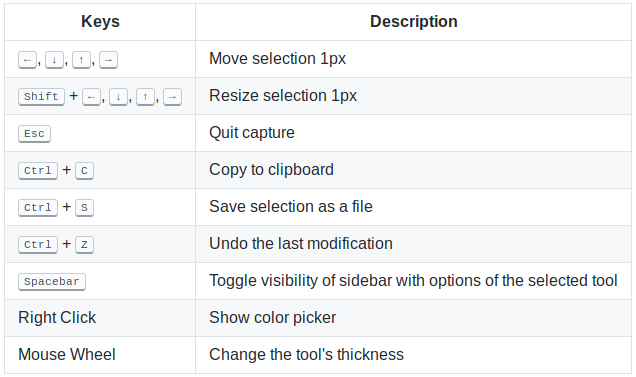 Clearly a lot of effort was put into making this tool. Flameshot would save many users a lot of time in taking screenshots for various activities that they may be doing according to their work (Just think of content makers, bloggers, journalists, researchers and everybody else). As far as we know, there’s no other tool on Linux that has the same capabilities and that is also open source (Flameshot is released under GPL license), which makes this tool unique in its field.

Flameshot had one task: Taking screenshots, and it has done it perfectly. We highly recommend that if you are going to use the tool in your work, to contribute something back to the developer through his PayPal account.

Wow, this is fantastic! Thank you for bringing it to my attention!

Can it take screenshot in some shapes (square, circle, ellips, etc)..?

I have tested Flameshot to see whether it could be used to replace Shutter.
For me it can’t.
How can you take a delayed screenshot in order to capture e.g. pull down menu in a window?
Now development seems to be started again on Shutter, I think I’ll stick to that.

This is mentioned in the official README page on GitHub. Simply you can run the following command for a delay of 2 seconds:

No. You can’t take screenshots of menus with Flameshot even if you use the delay.

I have tried flameshot. Its UI is beautiful but I still prefer shutter that offers tabbed multiple screenshots. With flameshot you have to save and close the screenshot before taking another one. With shutter you can also open and edit images from your hard drive for basic manipulation (add shapes, arrorws, text etc.)

I initially dismissed this tool as useless since most annotation requires some text notation and a text button was not present. The Text tool button should be enabled by default. It was only because I forgot having tried it, that I went back and investigated again. I am likely not the only one who dismissed it for lack of an add text button.

Flameshot is highly overrated. It is good because all other screenshot apps for linux are garbage. This has nothing on Window’s snip and whatever Mac had.

1. no keyboard shortcut to active
2. no text tool
3. can’t be bothered, who actually listens?

M.Hanny Sabbagh: As I have put it above, people idiomatically use 'Linux' to refer to the whole s...

Nathan Simmons: No, as you wrote above Linux is just the kernel. There would be no GNU/Linux dis...

M.Hanny Sabbagh: Linux IS an operating system. If you are using other kernels inside your OS then...

Want a free VPS for 2 months?