The android x86 project finished porting the android 8.1 Oreo system to the x86 architecture few weeks ago. In this post, we’ll explain how to install it on your Linux system so that you can use your android apps and games any time you want.

First, let’s download the android x86 8.1 Oreo system image. You can download it from this page, just click on the “View” button under the android-x86_64-8.1-r1.iso file.

We are going to use QEMU to run android x86 on our Linux system. QEMU is a very good emulator software, which is also free and open source, and is available in all the major Linux distributions repositories.

If you are on Ubuntu 18.10, you need to install different packages:

To install QEMU on Fedora:

For other distributions, just search for the qemu and qemu-kvm packages and install them.

After you have installed QEMU, we’ll need to run the following command to create the android.img file, which will be like some sort of an allocated disk space just for the android system. All android files and system will be inside that image file:

Here we are saying that we want to allocate a maximum of 15GB for android, but you can change it to any size you want (make sure it’s at least bigger than 5GB).

Now, to start running the android system for the first time, run:

Replace /home/mhsabbagh/android-x86_64-8.1-r1.iso with the path of the file that you downloaded from the android x86 website. For explaination of other options we are using here, you may refer to this article.

After you run the above command, the android system will start: 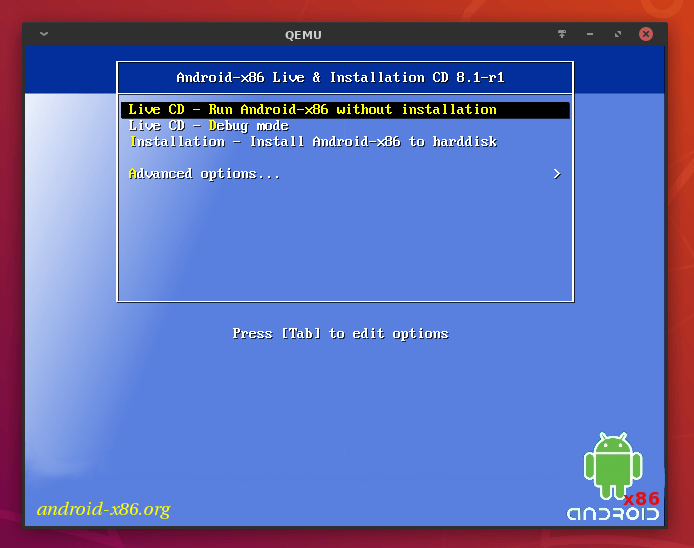 From this window, choose “Advanced options”, which should lead to the following menu, from which you should choose “Auto_installation” as follows: 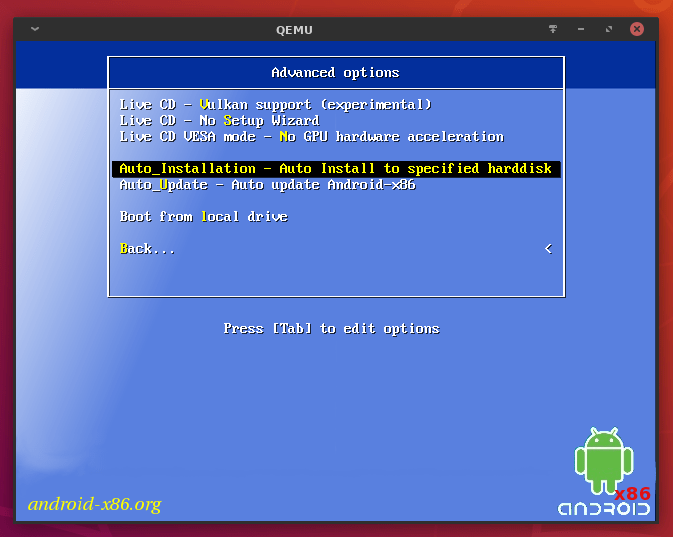 After that, the installer will just tell you about whether you want to continue or not, choose Yes: 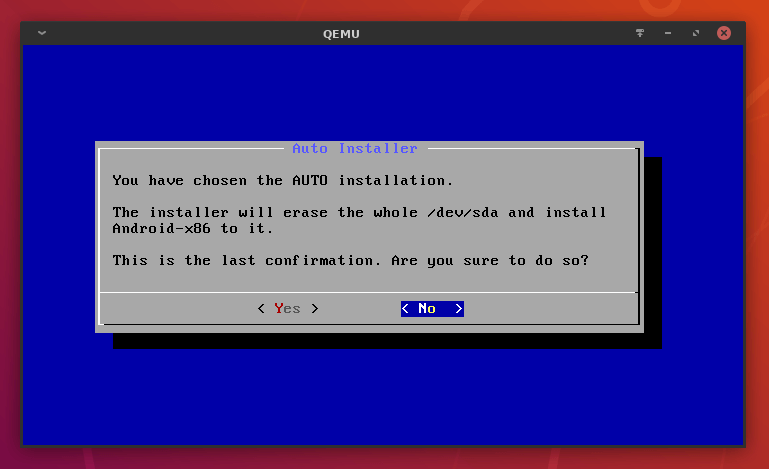 And the installation will carry on without any further instructions from you: 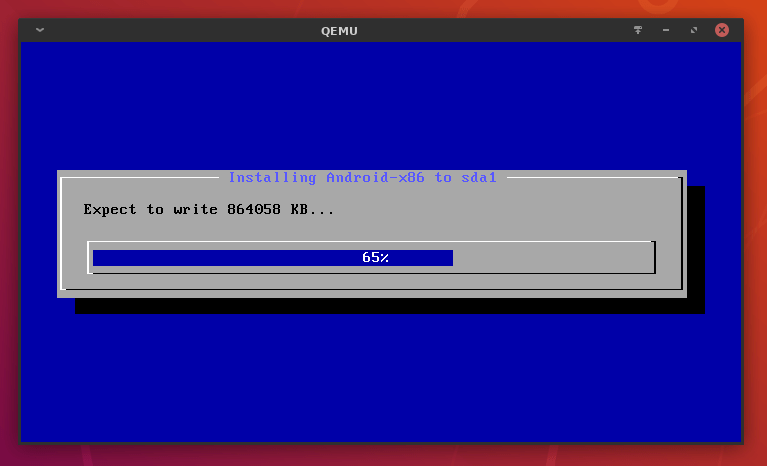 Finally you’ll receive this message, which indicates that you have successfully installed android 8.1: 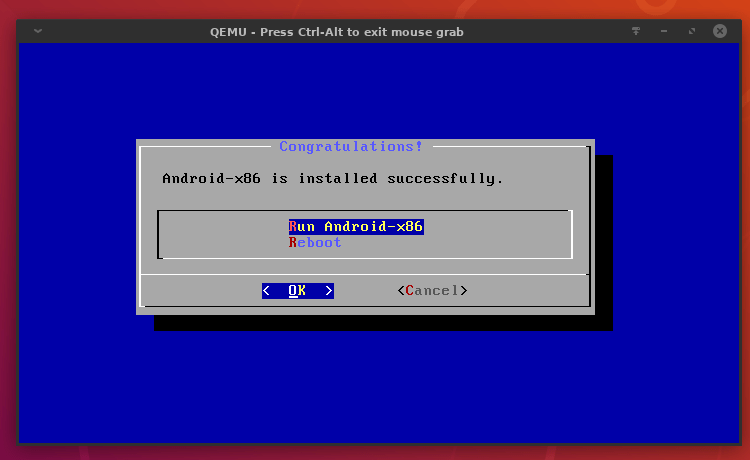 Now that the android system is fully installed in your android.img file, you should use the following QEMU command to start it instead of the previous one:

Notice that all we did was that we just removed the -cdrom option and its argument. This is to tell QEMU that we no longer want to boot from the ISO file that we downloaded, but from the installed android system.

You should see the android booting menu now: 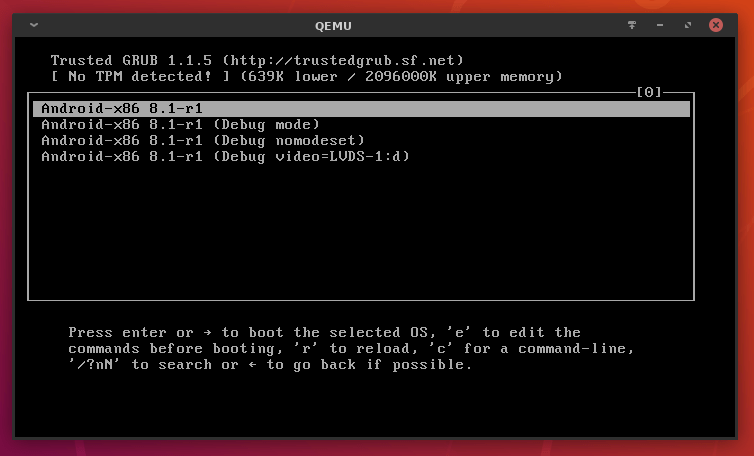 Then you’ll be taken to the first preparation wizard, choose your language and continue: 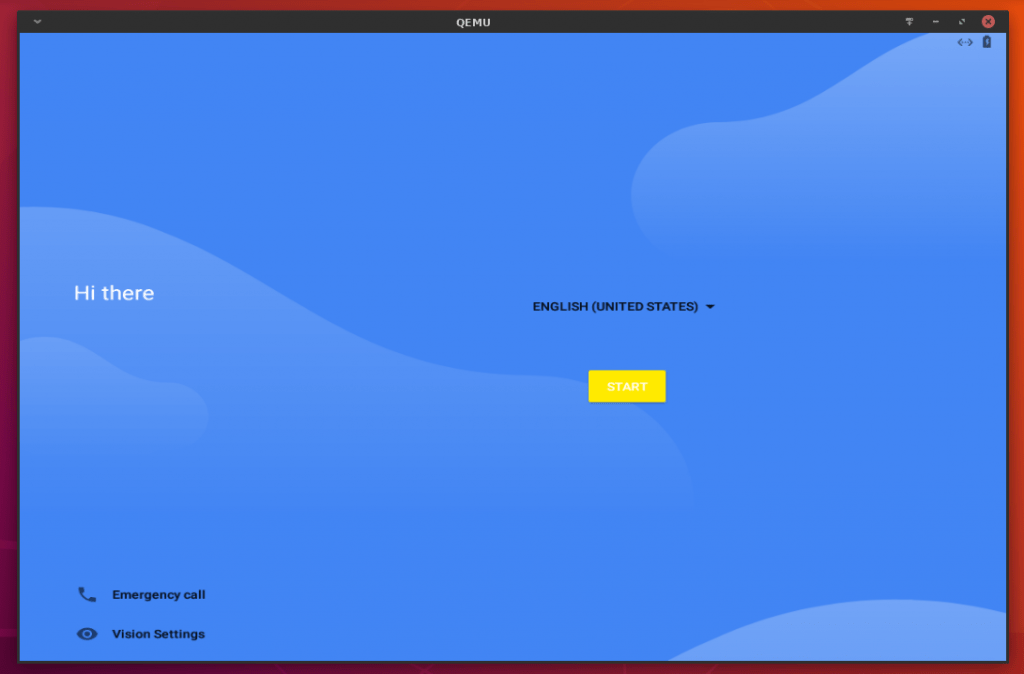 From here, choose the “Set up as new” option: 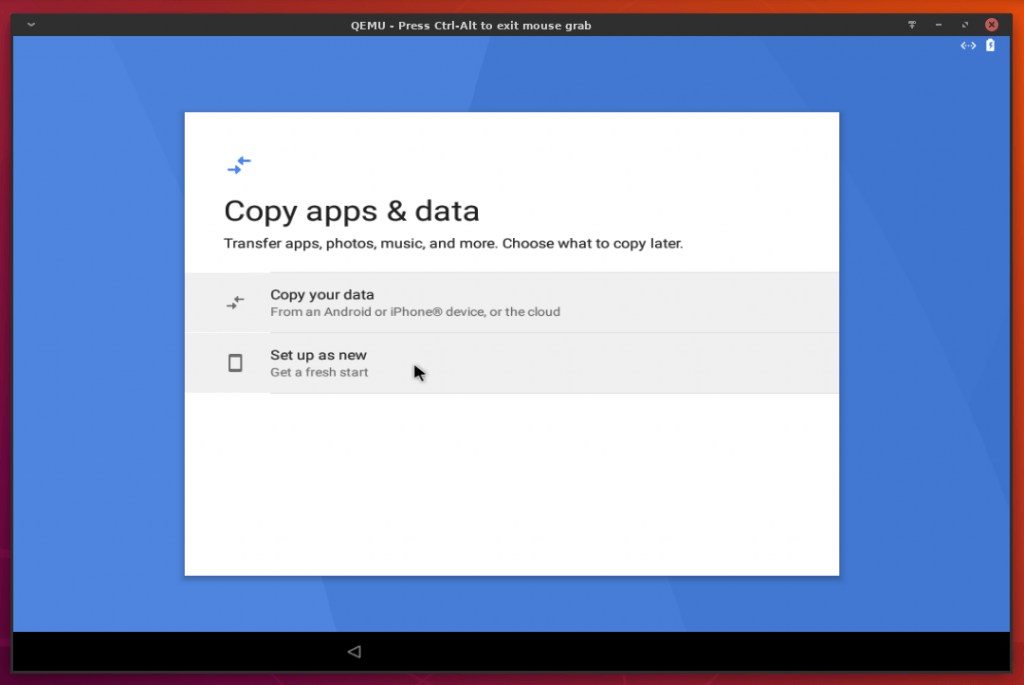 Then android will ask you about if you want to login to your current Google account. This step is optional, but important so that you can use the Play Store later: 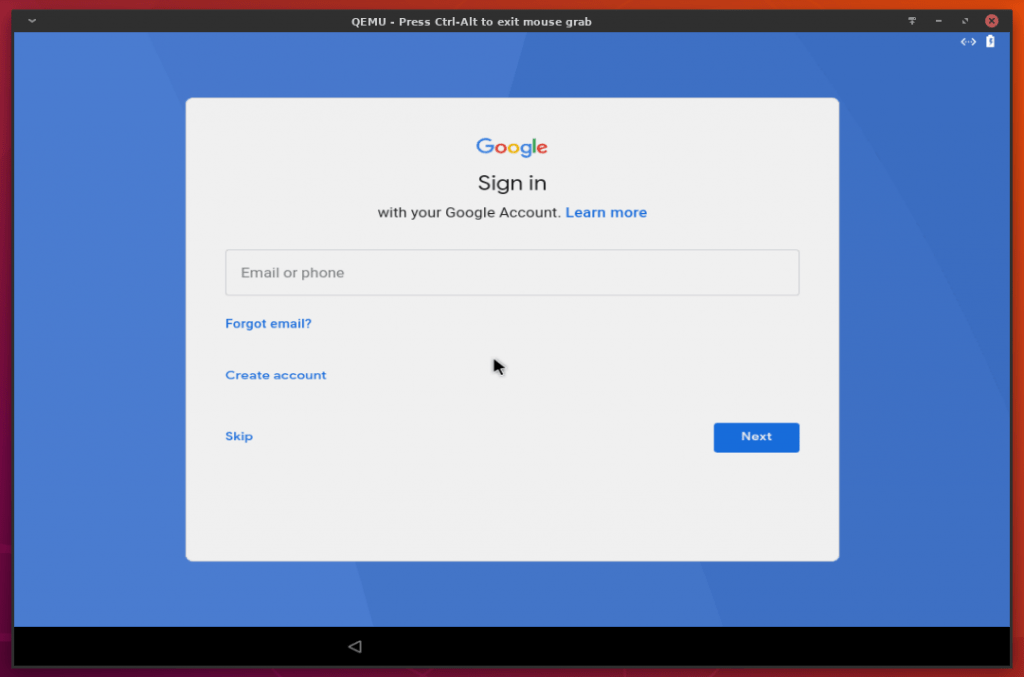 Then you’ll need to accept the terms and conditions: 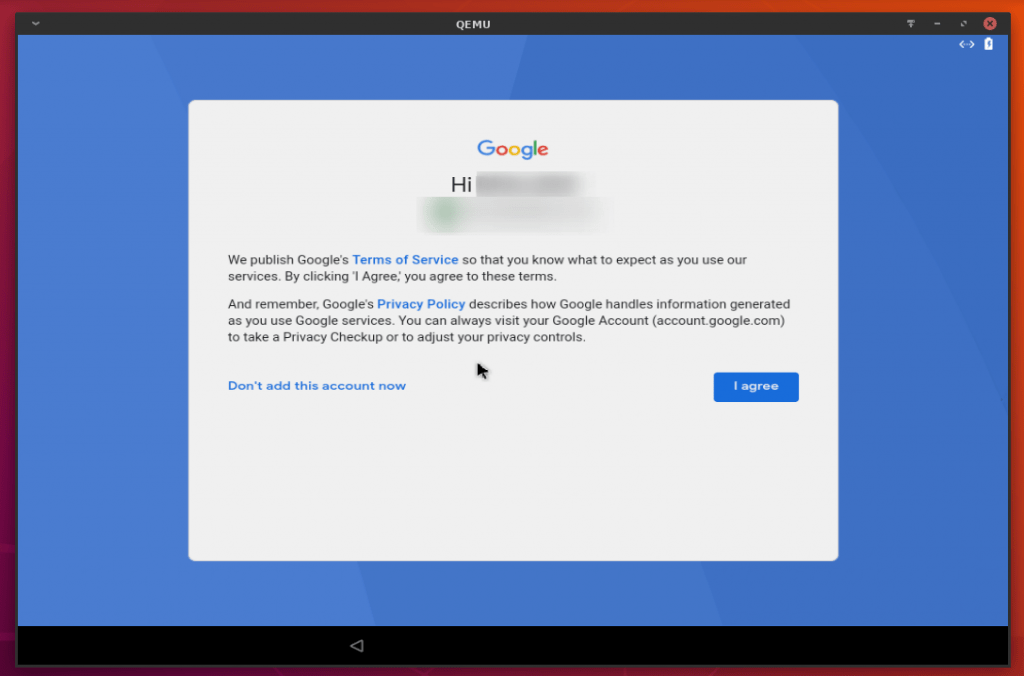 Now you can choose your current timezone: 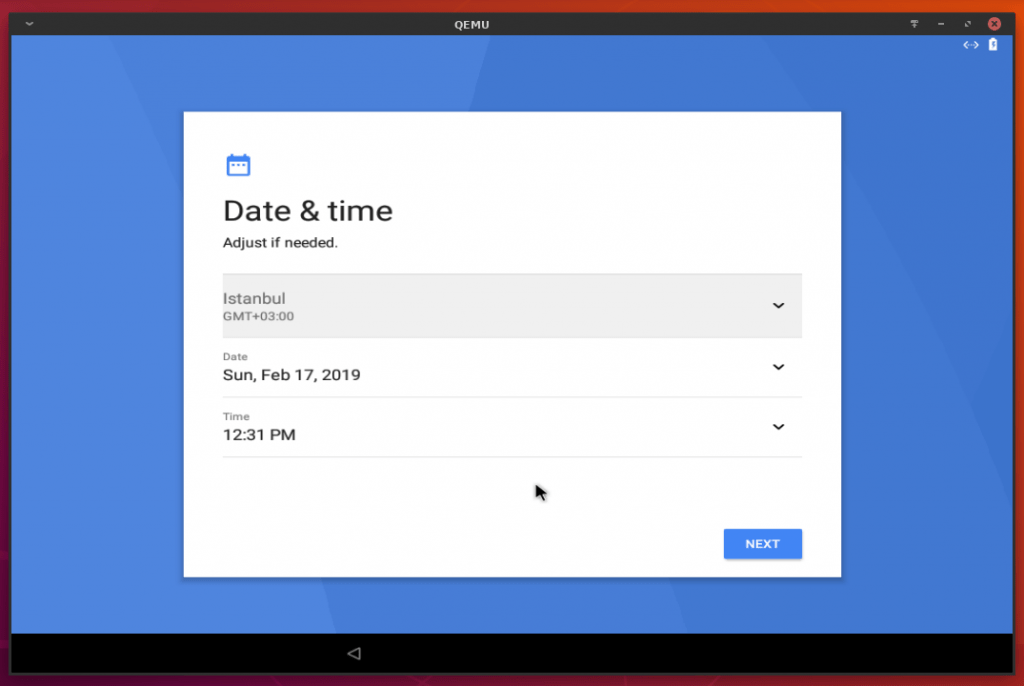 The system will ask you now if you want to enable any data collection features. If I were you, I’d simply turn them all off like that: 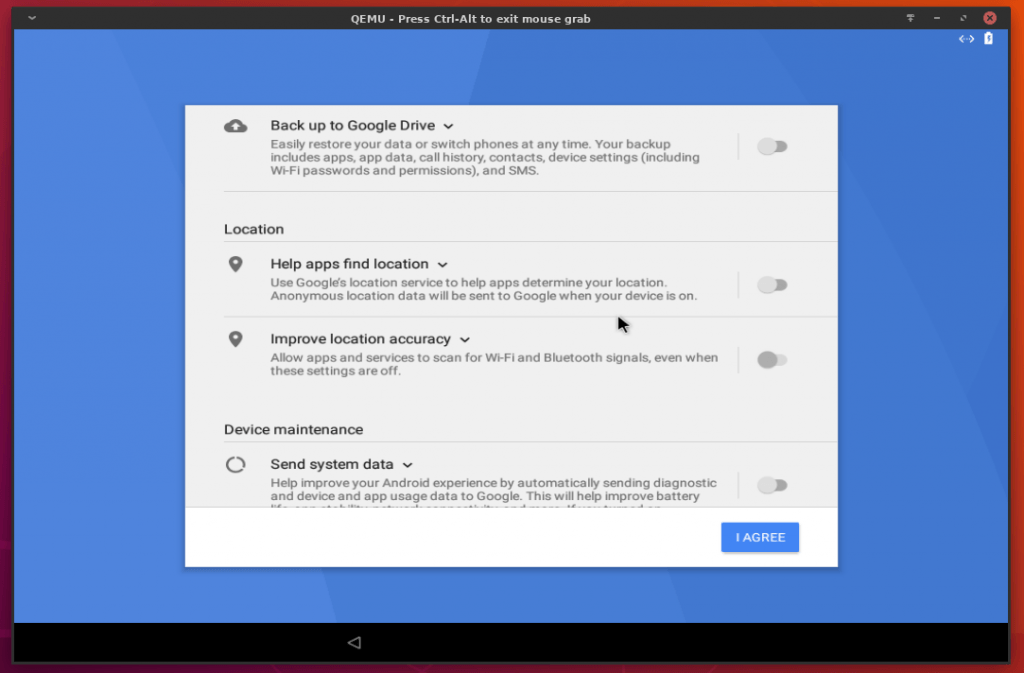 Finally, you’ll have 2 launcher types to choose from, I recommend that you choose the Launcher3 option and make it the default: 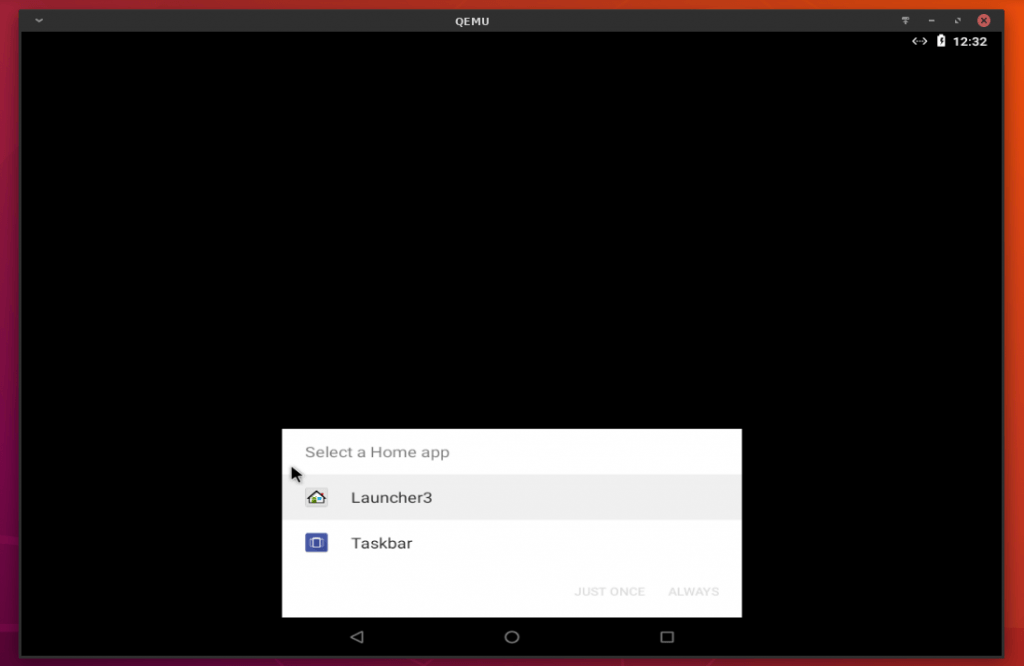 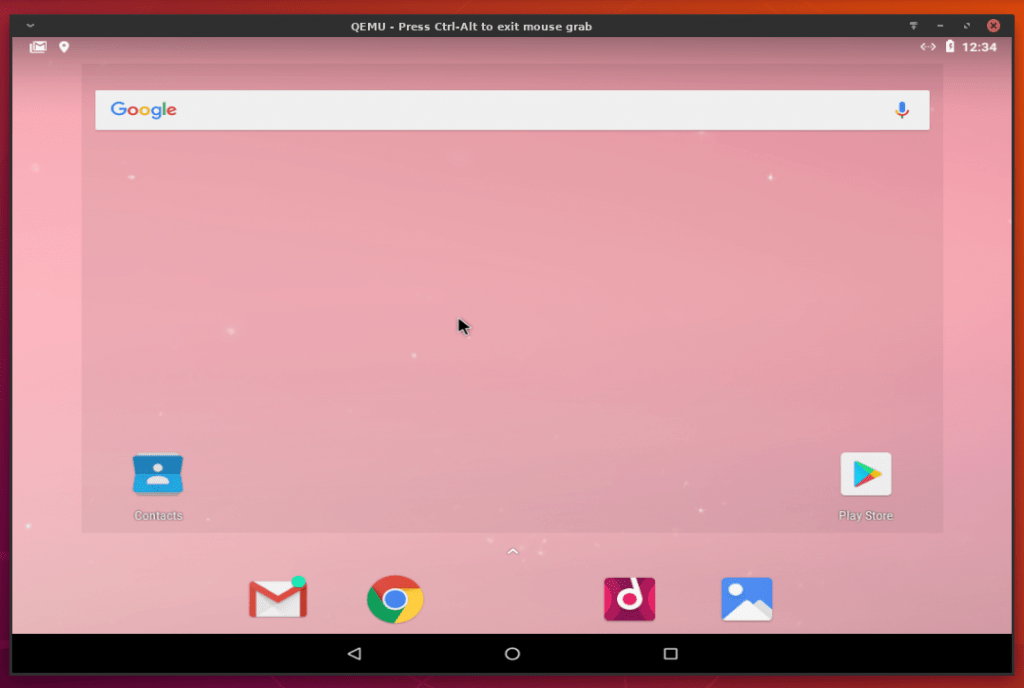 From here now, you can do all the tasks you want; You can use the built-in android apps, or you may browse the settings of your system to adjust it however you like. You may change look and feeling of your system, or you can run Chrome for example: 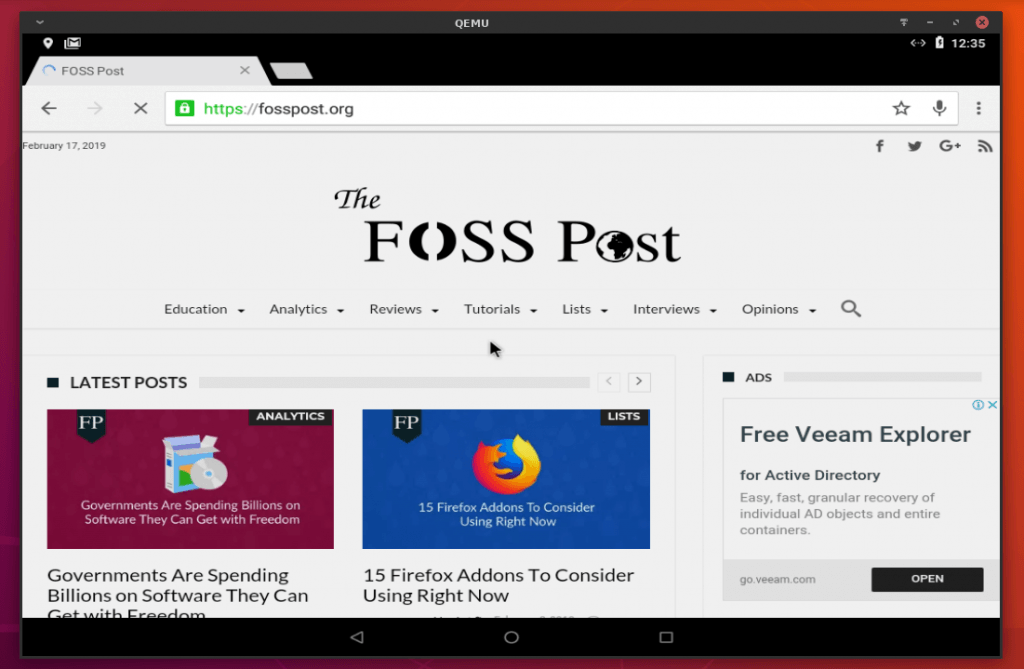 You may start installing some apps like WhatsApp and others from the Google Play store for your own use: 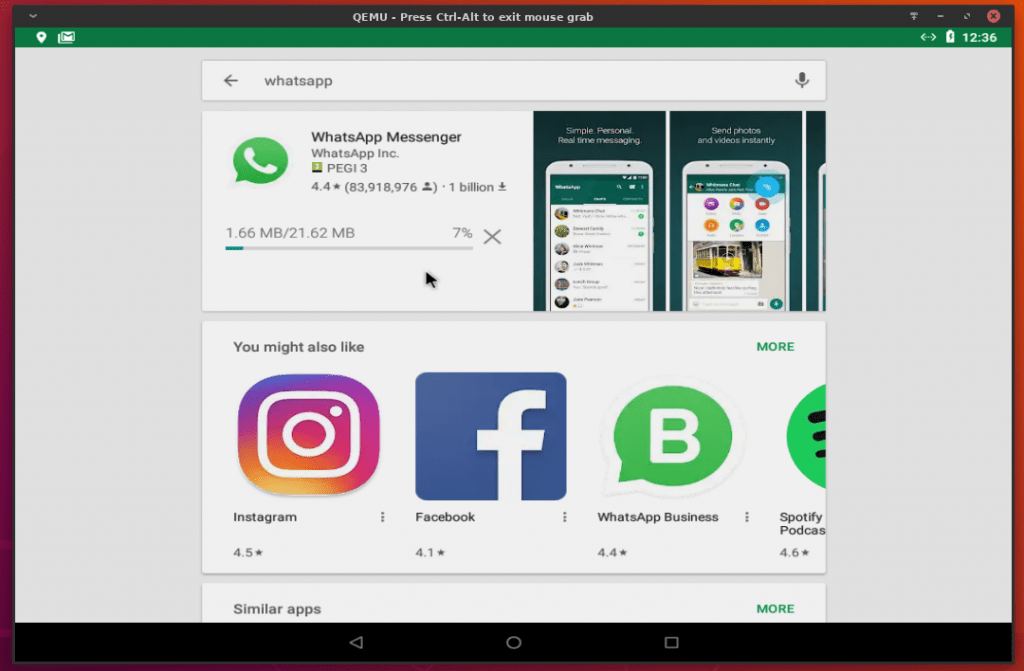 You can now do whatever you want with your system. Congratulations!

We don’t want to always have to open the terminal window and write that long QEMU command to run the android system, but we want to run it in just 1 click whenever we need that.

To do this, we’ll create a new file under /usr/share/applications called android.desktop with the following command:

And paste the following contents inside it (Right click and then paste):

Again, you have to replace /home/mhsabbagh/android.img with the path to the local image on your system. Then save the file (Ctrl + X, then press Y, then Enter).

[alert type=”warning” icon-size=”big”]Notice that we needed to use “pkexec” to run QEMU with root privileges because starting from newer versions, accessing to the KVM technology via libvirt is not allowed for normal users; That’s why it will ask you for the root password each time.[/alert]

Now, you’ll see the android icon in the applications menu all the time, you can simply click it any time you want to use android and the QEMU program will start: 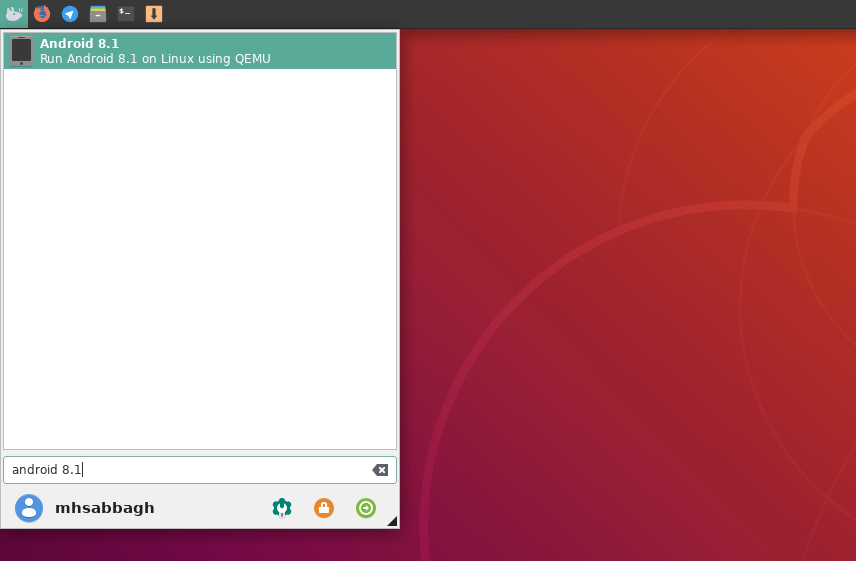 We showed you how install and run android 8.1 Oreo on your Linux system. From now on, it should be much easier on you to do your android-based tasks without some other software like Blutsticks and similar methods. Here, you have a fully-working and functional android system that you can manipulate however you like, and if anything goes wrong, you can simply nuke the image file and run the installation all over again any time you want.

Have you tried android x86 before? How was your experience with it?

Awesome! I’ve been waiting for an easy way to do this for YEARS!

I’m gonna try with “GNOME Boxes”, which is what I use for testing distro’s

Also please note that you should run the commands with sudo.

Why do you have to use sudo? Why do you need root to create/run a virtual machine? Would it work without sudo?

That’s already answered in the article, please read it carefully. No it wouldn’t work.

Just a heads up, but in Ubuntu 18.10, the libvirt-bin package was dropped in 18.10. It has been split into two packages.

Wonderful. Installed beautifully. However the command to install ‘qemu’ didnt work for me. I Simply used synaptic to install qemu. Rest of the installation was easy. Just for confirmation – will uninstalling qemu remove android? – i guess it should.

Removing it won’t remove android. You’ll need to manually remove the android.img file from your home directory. And then you’ll need to remove the /usr/share/applications/android.desktop file too.

Thank you.
How to transfer files into this system and use adb with it?

I don’t know of a way to directly transfer files, but you can send your files to yourself via any email service you are using. Or maybe run something like Dropbox.

Everything installed just fine. Google Play works. When I try to start any apps that I download from Goole Play is where the problem is.
They all start and immediately crash.
Thanks

I don’t have this issue here.

What are your hardware resources, and what are the resources that you allocated for the QEMU machine (How much memory and CPU)?

How exactly do you find your VM name, change the memory, CPU, and video memory?
I got everything up and running fine, I’ve launched my favorite game but it just hangs up on one of the loading screens. I think it might be due to cpu, memory, and vid memory.
Is it possible to get OpenGL ES 3.0 ?

Sorry for all the questions and thanks in advance!

You simply change the parameters of the QEMU command line:

See the 2048 and 3 numbers? They represent the RAM and number of CPU cores you want to use, so if you want to increase them, you can simply change those numbers:

Oh derp! Thank you for responding and pointing this out!

How do you get sound to work? Do I have to set a flag on the qemu command?

This is a known issue with QEMU; You’ll need to do some complicated things with QEMU and your host settings to make the audio work. If you just Google for “Qemu audio not working” you would find a lot of threads.

I tried this and on trying to boot into Android it wanted to look for and connect to WiFi and could not. Suggestions?

I get to the point where I launch from GRUB, but then I get stuck on a screen that shows large flashing “android” logo.

I have the same problem. Have you solved it, please.

Thanks for this tutorial!

I haven’t tried it yet, but I aim to do so. What I had tried in the past few days, is running Android x86 and boy was it fast.

Sadly I couldn’t find a way to install mdadm of sorts to have my server-hybrid work as expected. So I installed Ubuntu 18.04 LTS.

Still I would like to keep android x86 for games or easy access. Which brings me to my question:
does QEMU use hardware graphics acceleration? I know android x86 itself did so on my Intel iGPU.

thanks you so much. it’s very helpful.

Hi, I am Gurumurthy