NordVPN is one of the most common VPN providers in the world. They have a Linux version which works on both RPM-based and Debian-based distributions.

Sadly, they do not provide a GUI client for Linux, only a command line interface. That’s why it could be tricky to adjust NordVPN settings on Linux.

How to Adjust NordVPN Settings on Linux 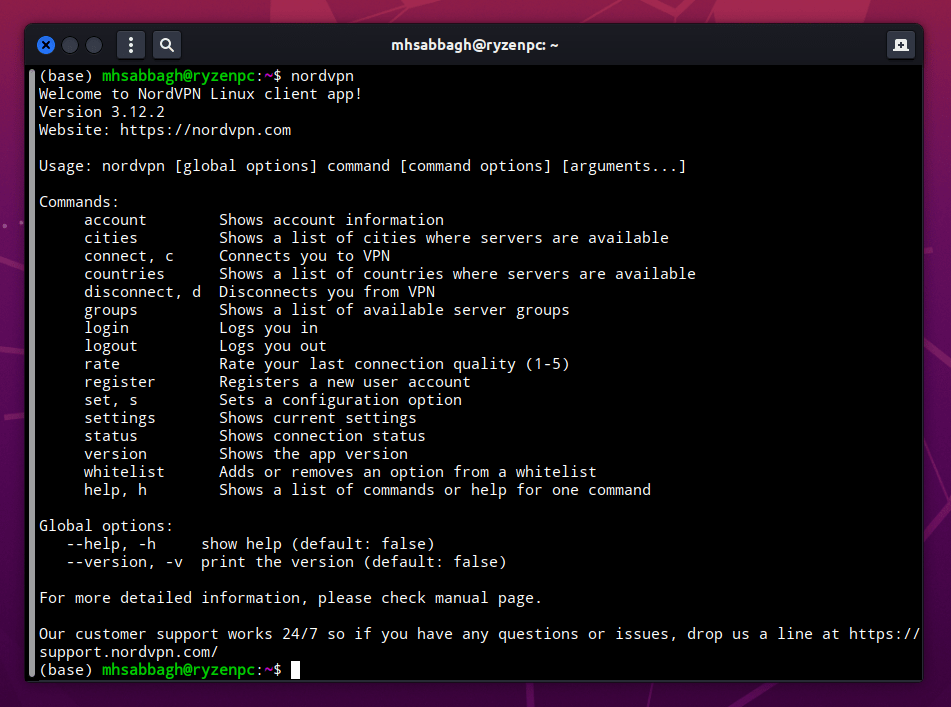 In this article you’ll read a quick guide on some of the most important options in NordVPN for Linux, and how you can tweak them.

The entire installation process is explained in the official website for NordVPN. Just follow it and you’ll have the client easily installed in few minutes.

After installing the client, you can login to your account with the following command:

After which you will be prompted to enter your username and password. After it you can connect to any VPN server in any country using the following command:

With replacing Germany with the country name you want (E.g France, Canada, Romania… etc), and you will be connected.

TCP and UDP are two common protocols that you can switch between while using NordVPN. In a nutshell, UDP is better if you want to browse streaming services or video & audio content, while TCP is better for everything else.

You can familiarize yourself with both protocols from the linked Wikipedia pages above.

By default, NordVPN for Linux uses the UDP protocol, but you can switch it to become TCP using the following command:

After it, you’ll need to disconnect and reconnect for the changes to take effect.

OpenVPN is used by default as the core of NordVPN client for Linux. It is a well-known VPN system that focuses on security and reliability, and is open source as well.

However, it is not the only option that you can use. Wireguard is an OpenVPN replacement that is generally perceived to give better performance, and has been under heavy development in the recent years, and hence you can give it a try.

Wireguard is implemented under the name “NordLynx” in NordVPN for Linux, and you can use it by default instead of OpenVPN by applying the following command in the terminal:

Kill switch is a common feature in VPN providers which prevents your system from making any connection anywhere without using a VPN. In this way, in case your network gets disconnected or some system issues happen, your real identity (Real IP address) will never be leaked because of the unmasked connections which happened after the VPN disconnection.

In other simpler words, your VPN connection will have to be turned on in order to connect to the Internet. Otherwise, your system won’t be able to make any connections.

To turn on kill switch on NordVPN for Linux, apply the following command:

You may also need to turn on the auto-connect feature, so that you avoid having to manually connect to the VPN server each time you get disconnected. You can do it with the following command:

And by replacing romania with the country name you want (You can also replace it with specific server such as us2435).

NordVPN uses its own DNS servers by default, which are used to resolve the URLs of websites you visit on the Internet. However, you can use a different DNS provider if you wish to.

And replace the DNS servers with the ones you want (The ones given above are for Cloudflare, by the way).

If you want to get back to the original NordVPN DNS servers, then apply the following:

So these are the most important options to know about while using NordVPN for Linux. It is a sad thing that the Linux client does not support split tunneling, which could have allowed you to exempt some apps from the kill switch feature in order to run them using your real IP address (And hence, real full speed).

Still, NordVPN is one of the cheapest and most common VPN providers in the market. There are other ones out there which could provide different features and give the same quality of privacy, such as ProtonVPN and MullvadVPN.

Thank you so much for these instructions. Most helpful. I haven’t been able to find any guide to rival it on the NordVPN website. At last I’ll be able to autoconnect and operate the killswitch. I’ll be returning to WIndows soon, except for my laptop, and I use the Android app on my tablet, which is instantly on, but it’d be so handy if Nord offered a GUI for Linux (Cinnamon Mint).

Nobody Special
Reply to  Trevor H.

They won’t. I have asked them repeatedly, they say it is not in their plans for the foreseeable future. I can’t understand why it is difficult to write a piece of code for linux. I dislike companies that neglect linux. It is the reason I will not renew NordVPN when my subscription expires.